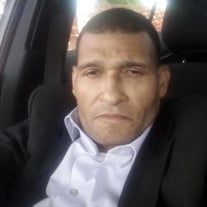 “ I have fought a good fight, I have finished my course, I have kept the faith.” Kim Hiawatha Allen, Sr., was born on February 12, 1962 to the late Lloyd George and Virginia Lee Allen. Kim peacefully departed his earthly life on April 4, 2021(Easter Sunday…Resurrection Day), after a brief illness. Kim received his education in the Baltimore City Public School System, Clifton Jr. High and Lake Clifton Sr. High School. He was such a handsome but shy young boy, with a smile that would light up any classroom. And while he studied the books, the young girls were studying him. He was very popular in school, as well as the neighborhood. Kim enjoyed life and lived well. Kim was the youngest of eight from the union of Lloyd (Gov) and Virginia (Ginny Bell), who grew up in a loving and happy home. He was spoiled rotten, especially by his father, affectionately known as “Gov”. Kim was employed at his father’s Bar “Club Aldora”, 2015 E. Federal Street. He worked so close and diligently with his father that he became his business partner, right hand man and security, helping to make the family business successful for over 25 years. Kim loved all of his family and his many siblings. He had a very special love for his heartbroken sister, Gloria, who will forever love and miss him deeply. Ledora (Lee) Allen (stepmother), was special to Kim, as well. He enjoyed the family gatherings to the parks, beaches, and cookouts. Kim was a giver. He was a leader and when you were in his presence you enjoyed the ride. He had a heart of gold, and whenever he got the opportunity to give and help somebody, he did so abundantly. Kim was a trash collecting hustler. He would collect all types of trash and say the items were antiques. Kim also owned a mobile snowball stand. He loved to play cards and frequent the Casinos. Kim loved seafood, especially oysters on the half shell and Alaskan crab legs. And if you tagged along, you were sure to get a big treat! Kim loved cars and owned quite a few. Kim was blessed with two sons, Kim, Jr. and Kavon, whom he loved dearly, and had a very special bond with both of them. There was nothing that Kim would not do for them. And when both sons blessed him with grandchildren, he was overjoyed with pride. He bragged about his grandchildren and was very honored to show love and receive love back, during the precious moments that they visited him. Kim will always be remembered for his big heart, his love for family, and his ongoing strength and courage to withstand his unfortunate paraplegic state, for so many years. Kim beat all of the odds because he never gave up and he never gave in. He was always Kim Allen, strong and valiant to the end! If Kim could speak today, his family believes that he would quote this scripture (2 nd Timothy 4:6-8) “For I am now ready to be offered, and the time of my departure is at hand. I have fought a good fight, I have finished my course, I have kept the faith. Henceforth, there is laid up for me a crown of righteousness, which the Lord, the righteous judge, shall give me at that day: and not to me only, but unto all them also that love His appearing”. Love Y’all…Kim Special family members who preceded Kim in death were his parents, Lloyd and Virginia Allen, his two sisters Delores “Jaki” Lovelace and Phyllis Allen, and his two brothers Robert Lee Allen and Ricardo Atkins. Kim now leaves behind cherished loved ones, who will always remember and carry him in their hearts: Two devoted sons, Kim H., Jr. (Latrice) and Kavon; stepmother, Ledora Allen; ten siblings, Lloyd Jr., Gloria, Michael, Steve, Andre, and Kevin Allen, Karen Atkins, Brenda Bowles (PA), Cynthia Peacock (NC), and Charmaine Williams; five grandchildren, Kristian, Kylie, Kaden, Kamari and Anaiya; three sister-in-laws, Valeria, Linda and Philimon Allen; a devoted and special friend until the end, Desire; and a host of loving nieces, nephews, cousins, and friends. Kim leaves a legacy of love! He will never ever be forgotten.

&#8220; I have fought a good fight, I have finished my course, I have kept the faith.&#8221; Kim Hiawatha Allen, Sr., was born on February 12, 1962 to the late Lloyd George and Virginia Lee Allen. Kim peacefully departed his earthly life on... View Obituary & Service Information

The family of Mr. Kim Hiawatha Allen, Sr. created this Life Tributes page to make it easy to share your memories.

“ I have fought a good fight, I have finished my course, I have...