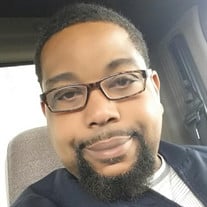 Kenith Vernon McCoy, Sr. was born on August 11, 1970 to the late Lawrence Lee McCoy Sr. and Elaine Renessia McCoy in Baltimore, MD. He departed this life on May 24, 2021. Kenith Sr., affectionately known as “Big Kenny” and “Ken”, received his education in the Baltimore City Public School System, graduating from Lake Clifton Eastern High School in 1990. Meeting at Sizzler Restaurant in 1993, Kenith met and later married the love of his life, Tyra Tillery on September 19, 1998. From their union, two gifts were born, Kenith Jr. and Tyree. His two boys were his pride and joy and what he would describe as his greatest achievement. Leaving Sizzler Restaurant, Ken went to Allstate Career School and obtained his CDL license. He was a truck driver for 26 years and worked at CSM BakeMark in Jessup, MD and Burlington, NJ for 24 years. Ken was a loving father and husband, and treasured spending time with his family. He never missed an event for either of his boys and reveled in watching them play on the football field. Ken adored and was head over heels about his wife, Tyra, who he affectionately called “Chica”. He enjoyed grilling/cooking, going to the gym/lifting weights, riding his bike, listening to music, washing his car, eating crabs and watching his favorite shows: Godfathers of Harlem, Snowfall, Power, Chicago PD, Hot Rod, Top Gear, and HGTV. During football season, he looked forward to watching football on Sundays. Ken made sure to stay connected. He wasn ’t a big texter, but instead would pick up the phone to call and check on his friends and family all the time. Ken was known for his hearty laughter and that signature “look” he would give you when you were out of order; his big heart, willingness to help and always showing up; his meticulous cookware and spices/marinades; and his love of tech gadgets. His favorite foods were fried chicken and ribs, and his drink of choice was Peach Paul Masson. His grill was his happy place, and he dared anyone else to go near it! He was infamous for sparking up a conversation with strangers, and his loud car music that shook the ground and you could hear from miles away. Kenith Sr. leaves priceless memories in the hearts of his wife, Tyra Tillery-McCoy, and sons, Kenith McCoy, Jr. and Tyree McCoy; Sister, Shanae Binyamin; Brothers, Lawrence McCoy, Jr. and Shawn McCoy; Father figure, Thomas Randall; Father-in-laws, Reginald Salliey and Edward Hawkins; Mother-in-laws, Annette Salliey and Wanda Hawkins; Brother -in-laws, Keppa Binyamin, Duran Little, David Cooper, Jr. and Calvin Purnell Jr; Sister-in-laws, Denisha Salliey, Regina Salliey Cooper, and Ashley Salliey-Little; aunts, uncles, cousins and a host of nieces, nephews and close friends. His Mother, Elaine McCoy; Father, Lawrence McCoy, Sr.; and Brothers, Jermaine Stevenson and Donte McCoy all preceded him in death.

The family of Mr. Kenith Vernon McCoy, Sr. created this Life Tributes page to make it easy to share your memories.