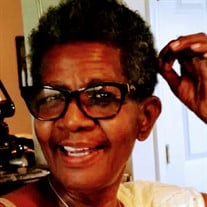 Mrs. Kathryn Ringgold was born November 7th 1951 in Baltimore Maryland to the late Vivian and Thomas Brown Sr. 70 Years later, She was called home by the Lord. Kathryn graduated Dunbar High School in 1969, she went on to attend some college at Morgan State University and later at Sojourner Douglass. Through out her career she worked as a dedicated professional administrator before retiring. She mothered three children, her eldest Ralph Jefferson, affectionally called "Yoc", her daughter Nyja Williams, who dimed herself “the favorite”; and the apple of her eye, her youngest, Joshua Williams. Kathryn met the love of her life Reginald Ringgold Sr. and they began to build a future together marrying in January of 1999, extending the family with step siblings, Stephanie Glasco, Reginald Ringgold Jr., and the late Lori Ringgold. As a child Kathryn had a bright spirit that was nurtured and guided by her God-fearing parents who instilled principles of faith and kindness. The love and trusting support from her siblings helped her to develop a courageous and magnanimous personality which would further create a long life of friendships filled with love and seldom dull moments. She had many mantras some of which consisted of: “God first Baby” and “that's the gospel!” She was inquisitive, always welcomed knowledge, so naturally in her later years “hey google” became an extension of her vocabulary. She was compassionate, ready to sacrifice what was needed to help and no one was excluded from her generosity. She would cast her goodwill net far and wide. If you knew Kathryn then you know she was a sucker for a long conversation, no one phone call was created equal, and time was never of the essence. You would have also known that her self care consisted of shopping, and long days of it. She loved the thrill of the hunt for a good bargain and no rack, isle, or shelf went unturned. If there was a deal to be had Kathryn was going to have it. With a contagious laugh and a quick sharp sense of humor to match no one was safe from her charm and her little seeds of wisdom. Like limb the love for music was an extension of her and you were likely to hear music blaring through out the house, and the time of day was no consequence. There are so many little goodies; unique ingredients that makeup of Kathryn: her strong will, her independent thinking, her naturally born leadership, and who could forget her immovable faith in her lord and savior Jesus Christ. She will be deeply missed. Kathryn was proceeded in death by her parents, Vivian and Tomas Brown Sr., her brother, Kevin Brown, and her step daughter, Lori Ringgold. She is survived by her husband Reginald Ringgold; her siblings, Thomas “Jeffery” Brown, Craig Brown (Kim Brown), Francine “Fatima” Brown, Sheila Brown, Janette Brown, and Joyce Brown; her children, Ralph, Nyja, and Joshua Williams; Two step children, Stephanie, and Reginald Jr.; Five grandchildren Deja, Raigan, Nasir, Elijah “Kingston, and Avin; two great grandchildren, Harlem and Hendrix; Two brother in laws, Chip, and Donald; and two siter in laws, Kitty and Queen; and a host of nieces, nephews, cousins and friends.

Mrs. Kathryn Ringgold was born November 7th 1951 in Baltimore Maryland to the late Vivian and Thomas Brown Sr. 70 Years later, She was called home by the Lord. Kathryn graduated Dunbar High School in 1969, she went on to attend some college... View Obituary & Service Information

The family of Mrs. Kathryn Ringgold created this Life Tributes page to make it easy to share your memories.