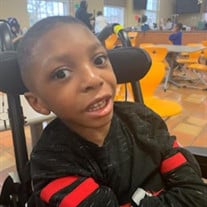 Khalil Mason Reaves was born on Sunday, July 21, 2013 to Kelvin Reaves and Monae Herrington. He peacefully fell asleep on Tuesday, October 12, 2021. Khalil received his educational training at the William S. Bare and Yorkwood Elementary Schools; through the Baltimore City Public School system. Khalil was loved so much while attending both schools by his friends, peers, and staff. He had a beautiful smile and was a “ball of sunshine” on the gloomiest of days. Khalil had numerous nicknames: “Pooh” as his mother would call him and “Lil” as his family would yell his name. But his most popular names were: “King”, “King Khalil”, “King Stinky Feet”, and “Stinky-Feet”. These nicknames were given to him by numerous of people, especially his team from Gilchrist in Baltimore, Maryland. Khalil joined Gilchrist in 2018 right as his health begin to decline. They played a major part in his life for the past 3 years. From pillow fights to blowing bubbles; Khalil was a regular on their unit. The pandemic might have stopped his monthly visits to the unit, but that did not stop the staff from home visits and FaceTime calls. Khalil is the oldest of 3 siblings and the first grandchild on both sides of his family. He loved playing with his brother, Kaiden; his uncle, Corey; and his cousins: Annora, Ava, Madisen and Mackenzy. Their bond was and still is very close; as they were raised to love one another and to have an unbreakable bond. Khalil also loved going to church. His mother took him to church every Sunday, and Bible Study too. During the pandemic he continued to attend his services and Sunday Bible School via Zoom. Khalil loved to sing and clap his hands. He even shouted “Hallelujah” and Thank You Jesus” here and there, as his Nana taught him; and he loved to sing “Grateful”. As Khalil’s illness progressed, his family was right there by his side. His mother would joke and say, If Khalil could talk, he would know all the “tea and spill all the secrets.” At times, Khalil would hear jokes, would smile, and make a noise to indicate that he still knew what was going on. Khalil’s biggest team player was his mother, Monae. From “sunup to sundown,” Monae physically carried him and was by his side until Khalil took his last breath. Throughout his illness, Monae made sure Khalil and his siblings were very well cared for; with the help of her family doing their part in the background. At times, they were there to help Monae while she guided them on how to care for him. As Khalil transitioned to be with the Lord, his mother held him in her arms and gently rocked him. As he took his last breath he was surrounded by his family and knew the love they all had for him. His memory will be cherished by his loving and devoted mother, Monae Herrington; two brothers: Kaiden and Amir; his grandmother: Collette Adamolekun; great grandparents: Jarris and and Dr. Jacqueline Taylor; four aunts: Dionne Taylor, Natasha Taylor, Deanne (DeVaughn) Stephenson, and Nicole Herrington; one uncle, Corey Adamolekun; a special great aunt, Patrice Taylor; godfather, Chris (Monica) Coffee; godmother, Carla (Curtis) Williams; uncle godfather, Jarris (Maria) Taylor and a host of uncles, aunts, cousins, relatives, and friends.  Khalil was preceded in death by his grandfather, James Herrington, Jr.

The family of Kahlil Mason Reaves created this Life Tributes page to make it easy to share your memories.