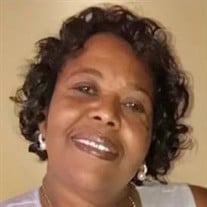 Judy Angela Davis, beloved daughter of the late Edna M. Morant and Joseph Henry Davis, was born on January 23, 1956 in Baltimore, Maryland. On March 15, 2021, she departed this life to enter the Lord’s Kingdom after a brief illness. After the early death of her mother, she was raised by her devoted aunts, Mrs. Ellaree (Juanita) Johnson and the late Mrs. Mabel Mabry, who played a significant maternal role in her life. Judy was educated in Baltimore City Public Schools. Upon graduation, she identified her passion for cosmetology. In 1985, she graduated from Jules Beauty School and then went on to own and operate Judy’s Beauty Salon for almost two decades. Her nurturing spirit and ability to identify with underserved youth led her to serving at Sykesville Shelter Home. In all her work she always offered a listening ear, sense of humor and a voice of reason. During her retirement years, she invested even more time into guiding and rearing her grandchildren and great grandchildren. Judy was a devoted Christian who joined Harlem Park Community Baptist Church and Mount Hebron Baptist Church. She later joined Greater Bethesda Missionary Baptist Church where she served faithfully and encouraged all family and friends to fellowship and to accept Christ. After many years of friendship, Judy and Thomas Jerome Turner wed in 1998 at Harlem Park Community Baptist Church. They remained devoted partners in marriage for twenty years. Judy was preceded in death by her parents Edna Morant and Joseph Davis; her husband Thomas Jerome Turner; her daughter Keenya Thomas-Yates; brothers Levern Morant and Gene Davis. She leaves to cherish her memory, a son: Lydell Henry; daughter-in-law: Grace Nkonge; seven very dear grand children: Angela Hursey, James “Bhuddy” Coker, Justin Henry, Tsion Yates, Nkatha Henry, Kathure Henry, and Makena Henry; two great-grandchildren: Ian Hursey and Kenyon Hursey; three sisters: Vivian Ward, Gretchen “Gretcho” Taylor, and Carolyn Miller; four brothers: Andre Hazelwood, Lyndell Hazelwood, Michael Miller and Menard Hazelwood; a special Aunt Ellaree (Juanita) Johnson, and a host of nieces, nephews, cousins and friends who will remember her and her infectious smile with fond hearts and warm memories. Beyond her children, grandchildren and great grandchildren, Judy was a mother figure to many and a friend to even more. She thrived on having those she loved around her and many sought her out for her welcoming nature. She always looked after others, whether it was planning family reunions, making sure everyone got to where they needed to be and were in good spirits. We pray for comfort and peace for her family and friends as they deal will this significant loss. We are all blessed to have known Judy. May her warm, loving legacy continue with those she has left behind. We submit Judy’s soul to the Lord. Rest In Glory Judy. We love you.

Judy Angela Davis, beloved daughter of the late Edna M. Morant and Joseph Henry Davis, was born on January 23, 1956 in Baltimore, Maryland. On March 15, 2021, she departed this life to enter the Lord&#8217;s Kingdom after a brief illness. After... View Obituary & Service Information

The family of Mrs. Judy Angela Turner, created this Life Tributes page to make it easy to share your memories.