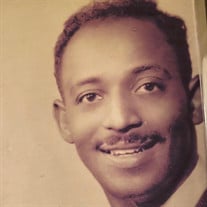 Joseph James, affectionally known as Joe, Speck, and to so many as G-Poppa, was one of seven children from the union of the late Vivian and Joseph James, Sr. Joseph was a loving and generous husband, father, grandfather, great-grandfather, uncle, brother, friend, and mentor. He was enlightened, empowering, and, enchanting with a boisterous laugh that brought joy and levity into any room. One might say that his cunning wit and steadfast integrity were the only characteristics to supersede his generosity. A political enthusiast, his passions included civil and human rights activism, justice, and the plight of Black people in America. Ever the political advocate, throughout his life, he held many positions of leadership in several community organizations. He lived his life as an avid reader with an insatiable appetite for knowledge and know-how. He used every opportunity to pour all that he learned into those around him, deliberately engaging younger generations to shore the foundation of future family success. He was born and raised in Towson, Maryland, and received his formal education in the Baltimore County public school system. It was around this time he would see his "future" performing in a dance recital, captivated, he connected with who and what would be one of the best decisions of his life, Lydia Jane Budd. Joe desired more structure and decided to follow the footsteps of his older sibling enlisting in the Air Force in 1951. He served in Kansas, Texas, and Guam. Soon after taking his discharge, he returned and married the love of his life, Lydia. Through this union, five beautiful children were born. “Speck” went on to achieve a Bachelor’s Degree from Morgan State University in Political Science and a Masters Degree in Social Work from Howard University. He established himself professionally at the Department of Housing and Urban Development before starting into what would be a pivotal role and career at the Baltimore City Department of Social Services. During his tenure at the Department of Social Services, Joe acted as the District Manager of several local offices. His reputation and ability to establish policies, standards, and operating procedures are still revered, and many remain intact to this day.Joseph, a mentor to many and loved by all, went on to retire in 1999. He received many honors in his career as a social worker, including Howard University Alumni Social Worker of the Year. He was also an entrepreneur, and along with his brothers, attempted to fill the shoes of their father, establishing JAMBRO, owning and investing in several real estate properties throughout Baltimore city. Always politically-engaged and community-driven, Joe was very active in several organizations amongst his peers and colleagues. A dedicated scholar and community leader, Joe James served as a Treasurer at his church, All Saints Lutheran, President of the Kenilworth Park Neighborhood Association, Howard University Alumni Association, Morgan State University Alumni Association, and as a Volunteer with the Third District Blacks for several local campaigns. Joseph believed his family, and the strength of the love in it was his greatest accomplishment and asset. He had very loving relationships with all of his children, grandchildren, great-grandchildren, family, and friends, an even adopted many of their friends as well. Joseph James Jr. gained his wings on the morning of July 3, 2020, and as he enters his final resting place, leaves a legacy of love, joy, and laughter. He is preceded in death by his parents, Vivian and Joseph James, Sr., his siblings, George, Vivian, John, Mary, and his in-laws Garnett Budd(Gwen), Mamie Sherman (John), Ada Hargrove (Paul), Milton Budd (Aurelia). He is survived by his brothers William and Gordon and survived by his sister-in-law Peggy and her husband, one of his dearest friends, Russell Williams. He is also preceded in death by his wife of over 60 years, Lydia B. James, and survived by his children Joseph “Chippy” James III (Linda), Leslie Stokes (Harry), Shawn James, Susan James, Jamie Kinney (Steven), and a devoted niece Rosalind “Bootney” Wilkins. He leaves behind to cherish his memories, his seven grandchildren, Melissa Beasley (Twone), Joseph James IV, Harry Stokes III, Timothy James (Anjelica), Jordan James, Noelle Kinney, and Noah Kinney. His legacy continues in his four great- grandchildren Ryan Beasley, Ava James, Rhys Beasley, and soon to be born Naomi James. Joseph James Jr. was blessed with a host of nieces, nephews, and other relatives, family, and friends to cherish his memories. The family and Joseph James will forever be grateful to his caretaker, Lula Conaway who became a great friend, and peace of mind in his last days.

Joseph James, affectionally known as Joe, Speck, and to so many as G-Poppa, was one of seven children from the union of the late Vivian and Joseph James, Sr. Joseph was a loving and generous husband, father, grandfather, great-grandfather, uncle,... View Obituary & Service Information

The family of Mr. Joseph James Jr. created this Life Tributes page to make it easy to share your memories.

Joseph James, affectionally known as Joe, Speck, and to so many...