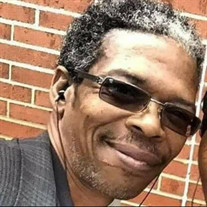 Joseph Arlander Bell was born in Baltimore, Maryland on October 6th, 1964, to Lewis Arlander Bell and Jenette (Williams) Bell. Joseph suddenly left this life on Monday, August 9, 2021. Joseph (AKA Joe) was named after his grandfather, but received his father’s middle name, Arlander. Joe received his education in Baltimore City Public Schools. After attending Polytechnic Institute and Southwestern High School, he obtained his GED. Joe was an undercover genius, an exceptional artist, and a rock & roll enthusiast. His depth of knowledge far exceeded any possession of degrees or stature. Along with his many talents, Joe had the Midas touch on whatever job he started. As a metalworker and, later in life, a machinist, he didn’t take long to master the craft. Refuting the theory that, “You can’t teach an old dog new tricks,” Joe would learn anything you threw his way. He took so much pride in his work, that he was reluctant to have anyone (even his boss) touch “HIS” machines even while he was off. He was certain someone would mess things up. Joe’s strong personality showed up in every task he performed. He was the “LET’S GET IT DONE” kind of guy. If someone needed a paint job Joe’s response was, “Where’s the paint?” If you needed your grass cut Joe’s response was, “I Got It,” cigarette dangling from his lips. Joe helped people regardless of the time and place. He hated seeing others struggle, so he delegated himself to be that guy to “Get It Done.” Joe was loved by all he met. Unfortunately, his progression through this life was not the easiest to say the least. Despite his struggles and intense demeanor, Joe had many people looking out for him, particularly in his West Baltimore neighborhood. His best friend Darneil Felder was considered Joe’s Guardian Angel by the Bell family. He took care of Joe wherever he went and whatever circumstance Joe found himself in, good or challenging. The love and care he was shown throughout his life is a testament to who he was at his core.  Joe’s other best friend was his sister and other Mother, Eulalia Bell. She had no problem getting him straight when he got out of line and Joe respected her for it. The void that her passing left in him was palpable, as it was a void felt by all. Joe also had a unique connection with his uncle, Rodney Williams. Although Rodney was some years younger than Joe, they considered each other as brothers. Truth be told, EVERYONE around him was like family. I know he would’ve wanted us to give a shout-out to Ms. Ann and the Easter family, all the Felders, the Smiths, the Mannings, the Wheatley’s, the Snowdens and so many more from the neighborhood. His heart for others was SO MUCH BIGGER than his love for himself. Although Joe struggled in this life, God has BLESSED him with true rest from his labors. He will greatly be missed. Joseph A. Bell was preceded in death by his sister, Eulalia Marie Bell. He leaves to mourn, his parents Lewis and Jenette Bell, four sisters, Susan (Robert, deceased), Natasha (Tony), Wanda, and Lisa (Ronald); one brother Tyrone (Shirelle); ten nieces Moriah, Jemara, Grace, Trina, Shantasia, Laishawnda, Kamakisha (Rodney), Kyesha, Karmisha, and Tijah; seven nephews, Ronald Jr., Christopher, Daniel, Jermaine, Kareem, Jarris, and Mekael; and a host of great nieces, great nephews, aunts, uncles, cousins, and friends.

The family of Mr. Joseph A. Bell created this Life Tributes page to make it easy to share your memories.

Joseph Arlander Bell was born in Baltimore, Maryland on October...