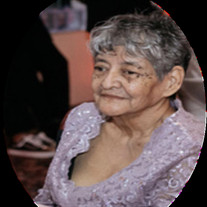 Josefina “Josie” Jones, was born to the late Enrique and Victoria Vargas in El Paso, Texas on January 28, 1947. Josefina was married and subsequently divorced in Baltimore, Maryland. In that union, Josefina had 3 children and was a military wife and home maker for more than 20 years. In the early 90’s she would meet her life partner, Antonio McCullough and they were together until her departure on October 23, 2021. Josefina loved her family. She was extremely devoted, especially when it came to her grandchildren. When she had them over for the weekends, she was known to cook an individual meal for them all. She did not play when it came to her kids, but she really didn’t play when it came to those grandchildren. Josefina was affectionately known to everyone who loved and knew her as “Momma Josie”. She would take you in and offer you the last piece of bread in her loaf if she knew you were hungry. When Antonio ”Tony” came into her life, she picked up some Soul Food cooking skills and she would make Greens, Potato Salad and Barbeque Chicken for our jobs and everybody was in love with her food. Josefina sacrificed a lot in life and she really never got the credit she deserved, but one thing we knew as her kids is that when we were old enough and able to do so, she was going to be taken care of, NO MATTER WHAT! And she was well cared for. Josefina was a special woman and only required one thing, and that was the love of her whole family which is represented in the videos you would have seen over the years along with the many photos. She loved singing and dancing to “Oldies But Goodies” and just having company over to talk. She spoke to her family in Texas often and when she was speaking in Spanglish, we just knew her and her nieces were talking smack because she would just be laughing really hard. Everybody loved her, she was such an amazing woman. Josefina was preceded in death by her parents, Enrique and Victoria Vargas, Grandson- Diego Vegas Jr., Brothers: Victor, Lorenzo, Jose. Sisters Esperanza, Enriqueta, and Helen and Niece Victoria (Chata). She is survived by her brother Juan Vargas, sister-in-law Beatrice,  Son Thomas (Tommy), daughter-in-law Sarah, Daughter Rebecca (Becky), son-in-law William Proctor Jr., Daughter Enriqueta (Puddin), son-in-law Anthony. 19 Grandchildren: Monica, Keara, Monique, Savoy 3rd, DeAndre, Christine, Shakeya, James Davis, SaQuan, Keon, Kayla, Shawn, Kyra, EJ, Eric, William Proctor III, DaQwuon, Anthony, Antwan, 8 Great Grandchildren: Makayla, Micah, Camille, Mason, Morgan, Saegan, Collin, Damiar, Life Partner: Antonio McCullough and a host of nieces, nephews, friends and family.

Josefina &#8220;Josie&#8221; Jones, was born to the late Enrique and Victoria Vargas in El Paso, Texas on January 28, 1947. Josefina was married and subsequently divorced in Baltimore, Maryland. In that union, Josefina had 3 children and was... View Obituary & Service Information

The family of Ms. Josefina Jones, created this Life Tributes page to make it easy to share your memories.

Josefina “Josie” Jones, was born to the late Enrique and Victoria...