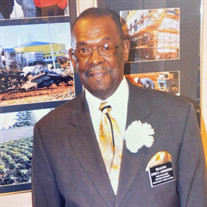 John Edward Leighton was born on August 25, 1936 in Bishopville, South Carolina. After fighting a good fight on June 18, 2021 GOD said the fight is over. John was the eldest of 5 children born to the late Anna Mae and Johnson Leighton. He has two brothers who proceeded him in death James (Honkey) and Dale Alan. John accepted Christ at an early age under the leadership of his late uncle William Leighton at the New Elizabeth Baptist Church. He later found a church home at New Psalmist Baptist Church, where he became a Deacon under the leadership of Bishop Walter S. Thomas Sr. He remained a "True Servant of GOD" as he applied it to every facet of his daily living. John started his education in Baltimore, Maryland. He later returned to Sumter, South Carolina to live with his grandparents where continued his education. John then enlisted into the U.S. Army. After serving in the Military, he returned to Baltimore where he held numerous jobs and was married twice. John retired from the U.S. Post Office after 30 years of service. John was a solider in every sense of the word. He served in the Military, the people on his postal route and most of all GOD! He was a true example of "A Man After God's Own Heart"! Even in his illness, he continuously made sure he had a quiet place to meditate, pray and would praise God daily for life and he never complained. He leaves to mourn, his 8 children, Andre, Damarie, Dwayne, Kimberly, Keith (Andrea), Nina (James), Sharon, Sheila; and two stepsons Antonio and (one who preceded him in death Monroe 20 grandchildren Andre Jr., Audra, Brittany, Damien, Desiree, Devin, Kylie, Alycia, Keonha, Quanette, Alexis, Cierra, Aaron, Davon, N esha, Corniya, Vanirha, Chasidy, Kevin and Joy; 11 great grandchildren Anajah, Andrew, Aniyah, Crew, Crimson, Donovan, Jabril, James, Jaziah, Joshua, and Kydinl; Sisters Angie, Delores, Ella, Lula and Mary; 1 Daughter-in-law, 1 Son-in-law and 1 Brother-in-law and a host of Nieces, Nephews and Cousins.

John Edward Leighton was born on August 25, 1936 in Bishopville, South Carolina. After fighting a good fight on June 18, 2021 GOD said the fight is over. John was the eldest of 5 children born to the late Anna Mae and Johnson Leighton. He has... View Obituary & Service Information

The family of Mr. John Edward Leighton, created this Life Tributes page to make it easy to share your memories.