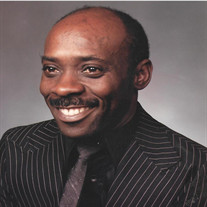 Joe Joseph Lewis was born on December 9,1945 in Baltimore Maryland to the late Carl and Bertha R Lewis. He transitioned to be with the Lord on November 7, 2021 after a lengthy illness. Joe was educated in the Baltimore City public schools system and was a Boy Scout. He graduated from Frederick Douglass High School in 1963. He married his first wife Sandra Y. Robinson in 1965. From that union together, they raised two daughters and a son. In 1975, he married his second wife, Gladys T. Wike and together raised three daughters and two sons. They were married for 46 years until his transition. Joe worked various jobs such as a meter reader for BG&E and layman at General Motors, but his one true passion was to be a truck driver. He worked as an independent operator/owner truck driver for a while until he started working for Ward trucking company in 1985. He remained with the company until his retirement in 2017. Joe's relationship with God showed in his words and actions. He was baptized at Mount Zion United Methodist Church in Baltimore and was a devoted usher.in his teenage years. In the early '80s, Joe joined Allen AME Church of Baltimore where he was a senior usher. He was a compassionate, kind, gentle giant but was quick to discipline you if it was warranted. He had an infectious laugh and was the glue that kept the family together. He had many passions and enjoyed taking family trips or hosting gatherings at his home with family and friends. He loved playing the keyboard, riding his motorcycle or driving around in his black Dodge Cougar. He was an avid Ravens fan and his favorite hero was Superman. Joe loved his grandkids and his grandkids loved him. They all had various names for him- Pop-Pop, Opa Joe, Granddad, Grand Joe, Grand-grand. He was affectionately called Unc-pops by his nephew. He is preceded in death by his parents Carl and Bertha R. Lewis, brothers Christopher (Duke) Richardson and Luther Richardson, sisters Emma Jonelle Cockrell and Bertha Mae Moore, son Jose F. Wike Sr., and grandson Teyon Wike. He is survived by his wife Gladys Lewis, sister Rosie Williams and brother Ernest Lee Montague. He leaves to cherish his life and memories seven children; Deborah Wilson (Raymond), Vivian Washington, Jacqueline Wike, Chesman Wike, Shari Brown (Edward), William C. Lewis and Karen Ewell (Deon). A bonus daughter, Cynthia Walker (Andrew) and nephew/son George Boswell, life long brothers Warren Smith (Bernadine) and Carl Motley (Linda), twenty grandchildren; Tamaka, Antwan, LaKisha, Chesman Jr., Alex, Ja'Ceyha', Teeah, Jose Jr, Tia, Ja'Nai, Karina, Kiara, JaWaun, Ja'Miera, Kymesheon, Angel, Shakia, William II, DeAndre and Deyon, a host of great-grands, nieces, nephews, family and friends.

Joe Joseph Lewis was born on December 9,1945 in Baltimore Maryland to the late Carl and Bertha R Lewis. He transitioned to be with the Lord on November 7, 2021 after a lengthy illness. Joe was educated in the Baltimore City public... View Obituary & Service Information

The family of Mr. Joe Joseph Lewis, created this Life Tributes page to make it easy to share your memories.

Joe Joseph Lewis was born on December 9,1945 in Baltimore Maryland...