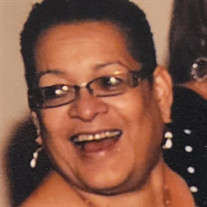 Jo-Ann Irene Courtney Sherrod (Jo), daughter of the late James (Buster) Howard Courtney and Gladys Areather Brunt Courtney, departed this life on Tuesday, 16 November 2021, at Northwest Hospital after suffering from COVID-19. Jo succumbed to complications from the disease but not without the love and support of her immediate family. God decided to completely heal and restore her body on the other side. Now, she resides with him, her parents, her sister, Janis McGill, and her brother, Emanuel (Tony) Courtney. Born on 12 July 1950 in Baltimore, Maryland, Jo received her education from the Baltimore City Public School System. After graduating from Douglas Senior High School, she married Collins Ray Sherrod on 10 July 1969. They divorced on 14 March 1986. From that union, Nichole Lynn Massey and Stefan Cain Sherrod were born. As a military spouse, Jo accompanied her husband throughout the United States and abroad. During that time, she obtained her cosmetology license and worked for several years at Esquire Hair Care Center in Fayetteville, North Carolina as a managing stylist. In 1988, Jo relocated back to Baltimore where she worked at Bank of America until her retirement in 2012 and immediately began her third career at Consumer Credit Counseling Services in Catonsville, Maryland. Jo retired for real for real circa 2016. Jo loved her Yorkie Chihuahua mix dog, Queen MJ (named by her grandchildren/Minnie Jo-Ann), as much if not more than her children and entire family except for the golden godchild, O’Mari, who ran a close second. She loved hosting family gatherings and would often coordinate Sunday dinners at her home. She could burn in the kitchen regardless the cuisine. She mastered Korean, Japanese, American, and soul food dishes to name a few. Jo was also an avid collector of LLADRO porcelain figurines and birds. She loved watching British detective television series, Food Network television, tennis, and soap operas. In her younger years, Jo was a tomboy and an all-around athlete. She was always selected to serve as team captain, excelling in basketball, softball, swimming, and tennis. Jo’s parents ensured she and her siblings had a strong spiritual foundation as they attended regular services at New Mt. Zion Baptist Church and New Christian Fellowship Baptist Church. In 2018, Jo joined Kingdom of God International Church and Outreach Center under the leadership of Pastor Karen A. Gineyard. Prior to her passing, Jo comforted Nichole by ensuring when her time came, she was going to be with the Lord. Her memory will forever be cherished by: her daughter, Nichole Massey (Kenneth); her son, Stefan Sherrod; three grandchildren, Shania Massey, Kendall Massey, and McKenzie Massey; two sisters, Pamela Dorsey (Larry), Marie Courtney; two brothers, Phillip Courtney (Dana), Paul Courtney; Brother-in-law, Samuel McGill; three nephews, Emanuel (Little Tony) Courtney (Jamira), O’Mari Keanu Boulware (Sai), Phillip Courtney Jr. (PJ); five nieces, Kaiya Ham (Mallard), Courtney Blackwell, Andrea McGill, Jessica Robinson (Michael), Jasmine Taylor (Mevrick); and a host of other relatives and friends.

The family of Jo-Ann Irene Sherrod created this Life Tributes page to make it easy to share your memories.