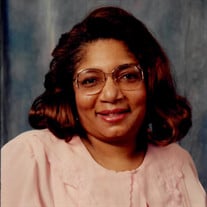 God blessed the late Charles Alexander Tyner, Sr. and Barbara Gloria Lewis with their first child, Jeannette Gloria Tyner-Baker, on September 4, 1949, in Baltimore, Maryland. Jeannette was granted her angel wings and sadly called home on August 27, 2020, after a brief illness. Jeannette lived in Baltimore City where she attended Mergenthaler High School. She worked for the United States government as a high security clearance data entry clerk for 18 years. During this time, she attended college and eventually found the love of teaching. Jeannette later became a teacher at Lloyd Keaser Head Start & Freetown Head Start where she impacted the lives of hundreds of children until she retired. Jeannette was an active member of John Wesley United Methodist Church since November 9, 2008. She engaged in church events and functions alongside her granddaughter Michaele. She attended Sunday School, served as a member of the Senior Usher Board, assisted with the Junior Ushers, coordinated the Youth Ministries, and taught Vacation Bible School. Nothing brought her more joy than attending the ROCK Youth Retreat in Ocean City, Maryland with the John Wesley Youth Group. Jeannette was always willing to lend a helping hand anytime volunteers were requested. She helped with community events such as the annual Halloween parties, summer camp, and other children’s programs. She loved listening to children and giving them the time they needed along with sound advice. Jeannette had a heart of gold and unselfishly helped others in need. So many young people looked up to Ms. Jeannette as “Mom” and she treated them as if they were her very own. Her interests included spending time with friends and family, hosting the prayer line on Friday nights, cooking for her family, reading the Bible, and watching football. Jeannette was a diehard Baltimore Ravens fan! She would prepare for games after Sunday service by putting on her Ravens gear so she could sit and scream at the television. She devoted much of her time and energy as a faithful, dedicated caregiver for her mother. Jeannette was preceded in death by husband, Ernest Baker III and brother, Charles A. Tyner, Jr. She will be continuously cherished by her two sons, Michael Ames and Raymond Ames Jr., three grandchildren, Michaele, Ajarie, and Ryan Ames, two nieces, Lynnette Johnson and Leslie Teal, one nephew, Charles Paris Tyner, daughter-in-law, Renelle Hughes, sister-in-laws, Dawn Tyner and Elizabeth Tyner, BFF, Michele Jacobs, and a host of aunts, uncles, cousins, extended family, and friends.

The family of Ms. Jeannette Gloria Tyner-Baker created this Life Tributes page to make it easy to share your memories.