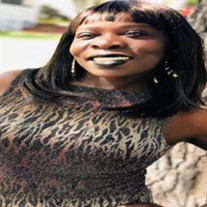 On Friday, November 6, 2020, Jannie Ruth Webb transitioned from her earthly routines to her eternal rest. Jannie was born December 28, 1964 in Sumter, SC to Lucille (Webb) and Walter McGougan. Jannie, affectionately known as “Jenny” was educated in the Sumter South Carolina School System during her formative school years, and then later educated in the Baltimore City School System when her family moved to Baltimore, MD in 1969. Jannie gave her life to Christ at an early age whereas she was baptized, and became a member of Fulton Baptist Church in Baltimore, MD, where she (alongside her sisters) sang on the choir. Subsequent to graduating from High School in Baltimore, MD, Jannie became employed as a nursing assistant, whereas she enjoyed helping others. In addition to being employed as a nursing assistant in numerous hospitals, Jannie also was employed as a private duty-nursing assistant. In the 1990’s Jannie and her family moved from Baltimore, MD to Fayette County Georgia where she was employed as a nursing assistant in an assisted living facility for the elderly. Jannie had a vivid personality, with a love for laughter! In fact, Jannie had an infectious laugh and smile! When Jannie would laugh, even if you were sad, you would find yourself laughing because of her trademark laughing sound! Jannie make it her priority to talk to her brothers and sisters frequently on the telephone, although they were miles apart, and she would always end her conversation by saying “I Love You!” Jannie leaves to cherish her memories, her husband, Steven P. Collins; her beautiful children; Sharnetta J. Webb, Delshawn T. Webb, Amanda M. Marks (Brandon), Rachel N. Collins, Steven P. Collins Jr., Lenny L. Collins, and Elizabeth H. Collins; her grandchildren; Nathaniel S. Webb, Shannon N. Webb, Asia M. Marks, Brandon A. Marks Jr., Keri M. Marks, Steven P. Collins III, Kiaori N. Harper, and Kyrie Russell; her mother, Lucille McGougan; her sisters, Carolyn Minor, Annie Belin, Linda Webb, and Nicholen McGougan (all of MD); her brothers, Tommie L. Webb (MD), and Daniel Webb (NC); One sister in law; Tammy T. Webb (NC); One brother in law; Franklin Minor (MD); One son in law: Brandon A. Marks Sr. (GA); and a host of beloved nieces and nephews, cousins and friends.

The family of Mrs. Jannie Ruth Webb, created this Life Tributes page to make it easy to share your memories.