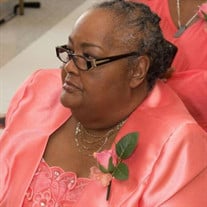 Jannie C. Ford-Anderson was born on June 20, 1944, to the late Lewis B. and Susie Ford. She departed her life on October 27, 2020. She received her formal education in Nottaway County, Virginia where she graduated from the Luther H. Foster High School in June, 1963. She moved to Baltimore in August 1963, where she attended Cortez Peters Business School, where she received a certificate as a Key Punch Operator. She attended Carver Vocational High School receiving a certificate in Dressmaking. She continued her education in 1987 attending Catonsville Community College. While there, as a part-time student, she earned two certificates in Law Enforcement; Criminal Justice Correctional Services. After accomplishing her short-term goals successfully, Jannie continued to earn two Associates Degree with a Double Major in the area of Criminal Justices. Realizing the importance of education, she dedicated to take a sabbatical from her studies to get her grandson Brandon acclimated to his first year in school. After completing her commitments with her grandson, she started on her quest to continue her education. In the fall of 1991, she enrolled as an undergraduate Criminal Justice student at Coppin State University. She worked timelessly and accomplished much: In 1995, she was elected to “Who’s Who Among Students in American Universities and Colleges”; In 1996 to 97 she earned a placement on “The National Dean’s List along with Coppin State University’s Dean’s List: Along with The United States Achievement, (Volume XII, Academy 1997 Collegiate Directory); She was a member of the “Criminal Justices Club”; She was elected as class student government representative; She was inducted into Alpa Kappa Mu Honor Society; and the Lambda Alpha Epsilon; completing her undergraduate studies with a 3.78 GPA earning a Bachelor of Science degree in Criminal Justices, Minor in Political Science; with Magna Cum Laude Honors. May 1998, she earned her Masters of Science degree in Criminal Justices Administration with a 3.77 GPA. She received several scholarships including a Senatorial Scholarship. She was joined in Holy Matrimony to the late Mallis Anderson, Sr. in March, 1966, and from this union three children was born. She was employed by L. Grief & Bro for ten years before being permanently laid off in August, 1974. In October, 1974, she joined the National Life & Accident Insurance Company being the first female agent employed. She was employed there for 12 years before entering State Services as a Correctional Officer at Maryland Correctional Institution for Women in June, 1986. She was promoted to the rank of Sergeant in October, 1989. She transferred in August, 1994, to the new and modern Baltimore Central Booking and Intake Center, where she was promoted to the rank of Lieutenant. In 2003, she transferred to Baltimore City Detention Center, then transferred back to Maryland Correctional Institution for Women in 2005. She retired in July, 2006. She joined the Cellar Creek Baptist Church in Blackstone, Virginia at an early age giving her life to Christ. After moving to Baltimore in 1963, she joined the Orchard Street United Methodist Church. In 1972, she joined Timothy Baptist Church where she served on several organizations; Senior Usher Board, Church School, Pastors Aide Society, Transportation Manager and Senior Group through the years. She served on numerous organizations in the community, neighborhood and school, serving as a parent volunteer while her children and grandsons attended school. She leaves to mourn her lost three children: Constance ; Sheila Perkins son-in-law Howard Perkins Jr.: Malik Anderson and daughter-in-law, Jean Anderson; Six grandsons: Howard Perkins, III; Brandon; Mallis III; Kahlil; Mekhi; and Malik III, Anderson, She was blessed to help raise her niece Marilyn Ford as her daughter, who blessed her with three additional grandchildren, Cedric, Alexis and Ollie; Four sisters: Mary Wyatt of Petersburg, Va.; Joyce Johnson (Deceased) of Hampton, Va.; Martha Ford of Crewe, Va.; and Shirley Banks (Deceased) of Blackstone, Va.; Four brothers: Lewis Ford (Deceased) & Melvin Ford of Baltimore, Maryland; Chester Ford of Crewe, Va. And Larry Ford of Delaware; Five brother-in-laws: Francis Wyatt of Petersburg, Va.; Earl Johnson, Sr. of Hampton, Va.; David, Joe, and Willie Anderson of Baltimore, MD., Six sister-in -laws; Ada, Elizabeth, Rochester Anderson; Beatrice Thompson of Baltimore, MD.; Mazell Hamilton (Deceased) of Bartow, Florida and Kim Ford of Delaware, and Ann Ford of Baltimore, MD. Also left to mourn are numerous uncles, aunts, nephews and other relatives and friends.

Jannie C. Ford-Anderson was born on June 20, 1944, to the late Lewis B. and Susie Ford. She departed her life on October 27, 2020. She received her formal education in Nottaway County, Virginia where she graduated from the Luther... View Obituary & Service Information

The family of Mrs. Jannie Carnell Anderson, created this Life Tributes page to make it easy to share your memories.