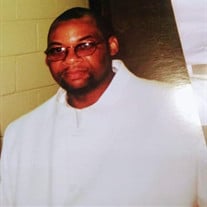 Mr. James Arnette Reed Sr., affectionately known as “Jimmy” was born to Reverend William C. Reed Sr. and Mrs. Marjorie Reed on January 14, 1953. He was known as “Tilley” to his siblings. He went home to be with his Lord on January 3, 2022. James was educated in Baltimore City Public Schools. He worked 33 years for the City of Baltimore Department of Public works, until he retired in 2004. Early on, Jimmy enjoyed boxing as an amateur boxer around Baltimore City. James was a magnificent singer, using his talent to sing at local lounges and weddings. He also sung “You and I” to his beautiful bride as she walked down the aisle to join him in holy matrimony in 1986. Jimmy had a hell of a memory, and loved reciting and making jokes. He also enjoyed watching Western movies, listening to Gospel music, cooking, and playing with toys with his children and grandchildren when they were young. Jimmy loved the Lord. He loved reciting bible scriptures, and his favorite quote was, “Lord, let your will be done!” Jimmy’s favorite holiday was Christmas. During the holidays he most enjoyed picking out “too big” live trees, cooking, and singing to his family. His favorite football team was the Raiders, no matter how good or bad they were. James was preceded in death by his parents, Rev. William C. Reed Sr, and Mrs. Marjorie Reed; three grandsons, Isiah, Eric, and Tyrese; and two sisters Joan and Marsha. He leaves to cherish his memory his wife Gloria; their six children, Charnte, Teronica, James Jr., Genay, Ural, and Stacey; his siblings, Beverly, William, Derek, and Devery; four sister in-laws, Patricia, Polly, Lenell, and Roberta; two brother in-laws, Stanley and Osby; ten grandsons, five granddaughters, six great grandchildren, and a host of family and good friends.

The family of Mr. James A. Reed Sr. created this Life Tributes page to make it easy to share your memories.