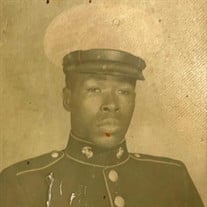 James Beaufort Jr., the beloved son of James Edward Beaufort, Sr., and Lila Esther Beaufort was born in Baltimore, Maryland on October 13, 1953. “Junior”, as he was affectionately known by all family and friends was the eldest son of seven children. After enduring long term chronic illness for several years, Junior peacefully entered into heavenly rest early on Wednesday morning December 15, 2021, at the Levindale-Lifebridge Rehabilitation Center. Junior received his education through the Baltimore City Public School System. He graduated from Frederick Douglas Senior High School in June, 1973 and he then enlisted in the US Marine Corp. There he proudly served as a MOS Food Service Specialist. While in the service, Junior met and married the love of his life, Rita Johnson. From their union were born two children that he loved unconditionally, Andria and Charles Beaufort. After completing four years of service as a Marine, Junior held various jobs, including a cabinet maker before being employed by Baltimore County Department of Sanitation where he worked until he retired. Junior was a very quiet and kind hearted person who would give you “the shirt off of his back”. Junior did not talk much but he was very competitive and he loved sports, especially football and baseball. So, when Junior was unusually talkative, it was about sports. In his sophomore year at Douglas, he was awarded a trophy for being an outstanding pitcher and valued member of their baseball team. He also liked to cook and he was known by his family for making the best tasting turnip greens, cornmeal dumpling and sweet potato pie. Junior was preceded in death by his wife, Rita Beaufort; his parents James Sr. and Lila Beaufort; and his sister Betty Lou Reaves (Eddie). Junior leaves to cherish his fond memory, his devoted daughter, Andria Beaufort and devoted son. Charles Richard Beaufort; six lovely grandchildren, Ikea, Charles, Maliek, Kyree, Charlee and Kasia; two sisters Alice Johnson (Albert) and Viola Bossard (Kenneth); three loyal brothers David Beaufort, Joseph Beaufort, Joseph Beaufort (Diana), Kenneth Beaufort; and a host of nieces, nephews, cousins, other relatives and friends.

James Beaufort Jr., the beloved son of James Edward Beaufort, Sr., and Lila Esther Beaufort was born in Baltimore, Maryland on October 13, 1953. &#8220;Junior&#8221;, as he was affectionately known by all family and friends was the eldest son... View Obituary & Service Information

The family of Mr. James Beaufort, Jr. created this Life Tributes page to make it easy to share your memories.