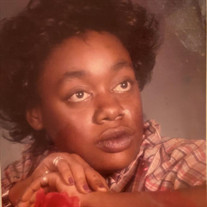 Jacqueline Marie Thomas, best known as “Jackie” was born on June 15, 1965 in Baltimore Maryland to Ruth Ann Thomas and the late Bernard Thomas.  Jackie received her education through the Baltimore city public school systems.   Jackie has been known to be “a Jack of all trades”, as she was very talented. There was almost nothing that she couldn't or didn’t do! From cooking, braiding hair, sewing, to building a house (LOL); if she gave her word that she would take care of a situation, you could consider the task done! There was no question “the miss fix it” of the family didn’t have an answer to. Jackie had the most distinctive laugh, if you heard it miles away, you would know, “that Chic”, as she would say, is somewhere nearby. Jackie enjoyed doing hair, crossword puzzles and cooking, but most of all, she loved spending time with her family, especially her grandbabies.   On Friday, March 12th 2021, Jackie suddenly departed this life, leaving to cherish her memories her mother Ruth; Sisters Bernadette, Wanda, and Lyndsy; Brother Rubin; three children Dayvon, Travon, Wendell; daughter-in-law ShiKita; sister-in-law Arnnita; eight grand children Kavontay, Kam’ron, Jordyn, Lalia, Journey, Travon Jr., Malaysia, Jodi; three adopted children Jabril, Dionne, A’Kiesha and a host of aunts, uncles, nieces, nephews and friends. Jackie will greatly be missed. Jackie was preceded in death by Bernard Thomas (father), Mary Bailey (Grandmother), Yvonna McClain (sister), Timothy Thomas (brother), and Tyi’Quione Jones (nephew).

The family of Ms. Jacqueline Marie Thomas, created this Life Tributes page to make it easy to share your memories.