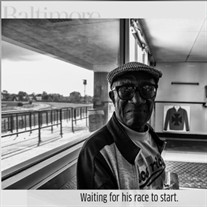 Herbert "Blue" Chase, son of the late Grace Chase and James Dison was born March 11,1926 in Baltimore, MD. On June 02,2020 the Lord visited Levindale Nursing Facility and guided him through to his eternal resting place. Blue, as he was best known, received Christ at an early age. He also received his education through the Baltimore Public School System. He went on to marry Evelyn E. Brown-Chase. Together they had a eight children, three of which proceeds them in death Bobby ,James, and Gregory Chase Blue joined the Army in the 1940's where he fought many battles with Germany being the most exciting.. After being discharged in the late 1950's Blue took on a new hobby. Placing bets at Pimlico Race Course, where he was their Biggest Fan. Blue traveled back and forward to Pimlico each and every day for 70 years. He has an entire article in the Baltimore Magazine thanks to Photographer J.M. Giordano. Blue's presence will be greatly missed and his spirit carries on. Left to cherish his memory is his daughter, Angela, sons; Norman (Snake), Herbert (Jr.), Lamart (Mart), and Ronald (Ronnie),three daughter-in-laws; Judy, Angie, and Edna, sister-in-law Betty Simmond of California, 28 grandchildren; Denise, Milton, Troy, Shelley, Lachae, James Jr., Stacie, Trina, James (Boom Boom), Donisha, Sonia, Tyesha, Ebony, Shane, Gregory Jr., Stephanie, Sharon, Kevin, Evelyn (Lady), Angelo, Rhonda, Vivian, Norman Jr., Shanice, Angela, Ronald Jr, Eddie, and Rachel. A host of Great and Great-Great Grandchildren. nieces, nephews, other relatives and many friends. Poem We miss you now, our hearts are sore, As time goes by we'll miss you more, Your loving smile, your gentle face, No one can take your place -The Family GrandDad, I know it's selfish to ask for one more Day, But I didn't want you to leave me this way. 2020 has been one heck of a year, but it has taught me how to love harder in fear.. Love You Always, Tyesha Chase

Herbert "Blue" Chase, son of the late Grace Chase and James Dison was born March 11,1926 in Baltimore, MD. On June 02,2020 the Lord visited Levindale Nursing Facility and guided him through to his eternal resting place. Blue, as he was best... View Obituary & Service Information

The family of Herbert Chase, created this Life Tributes page to make it easy to share your memories.