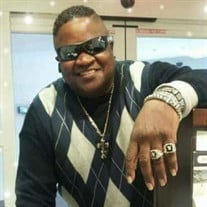 Henry L. Sampson, Jr. son of Viola and the late Henry L. Sampson Sr. was born on October 2, 1959 in Baltimore, Maryland. Henry, who was affectionately known as “Henny”, “Sam”, or “Papa Smurf” received his education in the Baltimore City Public School System. Henry accepted Christ at an early age. He continued his love for God and became an Altar Boy. As he became older his love for God never withered, he had his own relationship with him. Henry began attending the New Commandment Church of God in Christ under the leadership of Pastor Hersel Johnson for a while. A lot of people probably did not know this, but he had a homemade altar in his home and would say a morning prayer before he started his day. Now that is love. At age 18 he enlisted into the United States Army, were he served 6 years, but not before marrying the love of his life Twylla Dixon. Out of this union they were blessed with 2 beautiful daughters. Henry loved sports mainly baseball. His love for the Ravens clearly showed on his wall in his house. He was a die-hard Ravens fan. When he completed his time in the military he came home and held multiple jobs. One of his favorite jobs was when he worked at Mountain Manor Treatment Center. He loved helping and counseling the patients. Henry would light up a room when he entered. If it wasn't his flashy clothes or jewelry it definitely was the golds in his mouth when he smiled. He was loved by all who knew him and always willing to lend a hand. Henry was not only a good father, but he was a great mentor especially if he wanted you to enlist in the army...Smile. You could talk to him about anything but only if you wanted the truth. His zero-tolerance attitude was a standout trait for him. Henry loved his whole family especially his daughters and his grandchildren. He was so proud of his nieces and nephew and showed them and expressed it to them every chance he got. He was an excellent cook and the flyest dressing man on the planet. He was a " G". He was always cracking jokes and making people laugh. He was his own comedian. After a lengthy illness he departed his earthly life and took his eternal rest. Those who had gone on before him were anxiously awaiting his arrival to welcome him home. His grandson (Charles Bowman, Jr.), his father (Henry L. Sampson Sr.), his sister (Tracy Sampson), and his grandmother (Ruth E. Smith-known to all as "Sweetie Pie,) Henry leaves to cherish his memories: His daughters Latonya Montgomery(Tia) and Samantha Bowman(Charles Sr.), 4 grandchildren Donnie and Dominique Joy, Keontay Griffin and Kenyatta Corbett( as he called him the Fatman), His mother Viola, 3 sisters Cosenia, Sharon(Mathew) and Denise(Victor) and 1 brother Darin, 3 aunts Susan Newton, Blanche Williams, and Ruth Johnson(Hersel), 1 uncle Mitchell Smith. 7 nieces Domonique, Casaundra, Diamond, Chrystal, Dlizabeth, Diara and Breana and 1 nephew Marvin. A special friend Evelyn. A host of great-nieces, great-nephews, cousins, other relatives, and friends.

The family of Mr. Henry Leon Sampson, Jr. created this Life Tributes page to make it easy to share your memories.