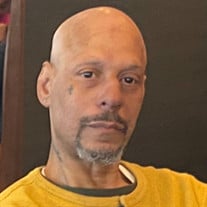 On December 11, 1964, Gregory Tyrone Lewis was born to Janice M. Lewis and Henry M. McDaniel in Baltimore, Maryland. He was born at City Hospital. He received his education in Baltimore City schools. Gregory was baptized at an early age and accepted Jesus as his Savior. He knew God in the pardon of his sins. Greg’s life was not a fairy tale, he had his ups and downs sometimes more downs than ups. Earlier this year Gregory was re-baptized, re-dedicated his life to Christ and received the gift of the Holy Ghost. His sister, Pastor Aretha Burley, was instrumental in doing this at her church, The Word of God Church Ministries, Inc., which he was a member. Gregory was a hilarious person who was a lot like his father, for he spoke in parables (you had to figure out what he said). We had to do Arsenio Hall, hmmmmm with one finger along the side of your head and say, “What did he say?” In his younger years, we (me included) his brothers and sisters would go skating. We looked forward to being together and just having fun. He also loved to watch basketball and football with his older brother Maurice (known as Marty), they were a pair!! (Boy were they a pair). Gregory loved his nieces and nephews. He was always there when needed for any family affair. He and his brothers were very close. In his final days, he and his sister (Aretha), fondly called Dinky became very close. Yes, in Gregory’s life he overcame many hardships but loved and never forgot his family. In October of 2019 Gregory was diagnosed with pancreatic cancer, which spread throughout his body. Gregory always maintained, he was a soldier and that he was until he himself asked God to call him home and on August 28th, 2020, God answered! We will miss the body but not the pain he endured. We know his spirit will live forever in the bosom of God, his father, who gave him life and received him back when he asked, some of us don’t get this. A soldier until the end. We, his family, salute him with the medal of Honor!! Preceding him in death, his father Henry M. McDaniel, and son Gregory Lewis Jr. Gregory leaves to cherish his memory and continue his legacy, mother Janice Lewis, three children, Marlin Ennels, Javon Hamlett Sr., Nicole Lewis, Six beautiful & handsome grandchildren. He has four brothers, Maurice Lewis (wife Laverne), Patrick Lewis Sr. , Shawn C. McDaniel Sr. (wife Shannel), David McDaniel (wife Linda). Six sisters, Pastor Aretha D. Burley of (The Word of God Church Ministries, Inc.) Baltimore, MD, (Husband Bishop Herschel Burley Jr.), Anita Lewis, Marion Cousins (husband Sidney), Anna Hough and Rhoda Robinson (husband William) and Stephanie Drayton. Again he had a host of nieces and nephews, friends (Mr. Alfred, who often took him to various places he needed to go). God Bless the many of you who came to pay last respects despite the pandemic. God Bless and Keep You.

On December 11, 1964, Gregory Tyrone Lewis was born to Janice M. Lewis and Henry M. McDaniel in Baltimore, Maryland. He was born at City Hospital. He received his education in Baltimore City schools. Gregory was baptized at an early age... View Obituary & Service Information

The family of Mr. Gregory Tyrone Lewis, Sr. created this Life Tributes page to make it easy to share your memories.