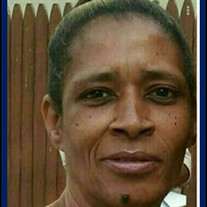 Gloria Clarice Strong; beloved daughter of the late George Davis and Claudia Brothers was born on September 18, 1957 in Baltimore, Maryland. After battling serious medical issues, God called Gloria “Geegi” home to glory on February 7, 2021. Today, “Victory is Hers, Amen and Amen”! Geegi accepted the Lord Jesus Christ as her Savior at a young age. She rededicated herself to the Lord later in life. She often spoke about the Lord and her brother George “Duck” Davis Jr., who preceded her into eternity. Geegi was the first born of her generation and was very proud of it. She loved spending her time with her grandchildren and family. Her passion of teaching children everything educational was undeniable. Dressing up for Halloween, taking all the kids trickor-treating and eating all the Halloween candy was a joy. Geegi loved to bake, especially cakes. Spades who could beat her? She was the best Spades partner; try to cheat she would catch you in the thought of it. Drawing was another one of her favorite past times. Any way that she could lend a helping hand to others, she would. Geegi enjoyed home improvement and home design with her forever, beloved Gary, “Man” Strong. Geegi was educated in the Baltimore City Public School System. Shortly graduating from Hamilton Business School, with a degree in Business Administration she began to work at Citi Corp as a Charge Back Investigator Accountant. Geegi worked proudly at Citi Corp until she was unable to do so. Blessed with talented hands, Geegi also styled hair from time to time within her community. Geegi leave to cherish her memory her loving sons, Quincy “Bear” Robinson; Terhran “Toot” Strong; soul-mate Gary Strong; daughter-in-law, Tahir Strong; beloved mother Claudia Brothers; stepfather James Brothers; grandchildren, Dorian, Quincy, Da’Jah, Tyesean, Nevaeh, Lyric, Terhran Jr., great grands, Dayonna and Dakota; two sisters, Valerie Weeks (Wendell Weeks) and Aretha Davis-Cure (John Cure); close cousin Denny Washington; sister-in-law Yvette Davis; close friends Andrea Anderson, Anthony Bullock, Kimberly Bullock, and a host of other family and friends.

The family of Ms. Gloria C. Strong, created this Life Tributes page to make it easy to share your memories.