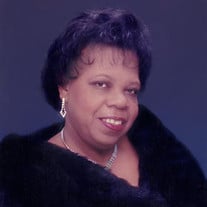 “I have fought a good fight, I have finished my course, I have kept the faith” 2 Timothy 4:7 - KJV Gloria Eugenia Hollingsworth Moon, the daughter of the late Charles L. and Aggie M. Hollingsworth, was born on September 13, 1940 in Wayne County, North Carolina. She departed this life and went home to be with the Lord after a lengthy illness on Monday, June 15, 2020, at Keswick Nursing Home. Jean, as she was affectionately known by her family and friends, received her formal education in the Baltimore City School system. She later received her Associate’s Degree from the Baltimore City Community College. Jean always had a love and passion for food which led her to pursue an interest in food services. She began her career in food services at Mercy Hospital where she faithfully served in this industry for many years. She completed her food services career as a manager for Marriott Food Services and decided to change career paths. Jean’s nurturing spirit would lead her to become a case manager for the Department of Foster Care in Social Services. After 42 years of service, Jean retired from the State of Maryland in 2002. Jean accepted Christ as her Lord and Savior at an early age, and was united with St. Matthews United Methodist Church where she became a lifelong member. Jean was a devoted member of The Young Adult Choir, United Methodist Women, Senior Ministry, and also used her love of food to give to others while serving on the Hospitality Ministry. Jean was married to James Parker, Sr. and was later remarried to Mack E. Moon. Out of this union, her youngest daughter, Michelle Moon, was born. Jean was preceded in death by her oldest daughter, Deborah P. Parker, son, Timothy L. Parker, grandsons, William Parker, Domonick D. Parker and sister, Karen C. Planter. Gloria Eugenia Hollingsworth Moon leaves to cherish her memory, her devoted daughter, Michelle R. Moon; her sisters: Lois M. Jefferson (Herman Sr.), Sandra L. Jones, and Charlease Adams (Thomas); her brother-in-law: Earl Planter; her grandchildren: Damon, Tiffaney, Shemeca, Donte, Otelia, Ashley and Tiara; her great-grandchildren: Dreshawn, Miracle, Kaleb, Demi, Kamren, Terriana, Journey, Peyton, Aalayasia, Xabier, Xaner, Azira; her God-son: Nathaniel Scruggs; and a host of nieces, nephews, aunts, uncles, cousins and friends.

&#8220;I have fought a good fight, I have finished my course, I have kept the faith&#8221; 2 Timothy 4:7 - KJV Gloria Eugenia Hollingsworth Moon, the daughter of the late Charles L. and Aggie M. Hollingsworth, was born on September 13,... View Obituary & Service Information

The family of Mrs. Gloria Eugenia Moon, created this Life Tributes page to make it easy to share your memories.

“I have fought a good fight, I have finished my course, I have...