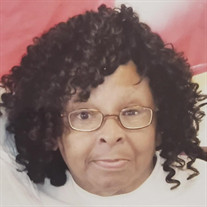 Gladys Johnson Williams daughter of the late Ralph J.C. Johnson & the late Gladys Ollie Grimes Johnson, was born on June 16, 1943 in Baltimore, Md. Gladys passed away peacefully on September 13, 2021 after a short illness. Gladys lived in New Jersey for a short time as a child after her mother’s passing. Gladys returned to Baltimore where she was raised by her grandmother Josephine. Gladys was educated in the Baltimore City Public School System. She graduated from Paul Laurence Dunbar High School. Gladys was a very smart and intelligent woman who loved to read whatever she could get her hands on. She became a teacher in the BSPSS. Gladys was a fun loving, carefree spirit who found no fault in others, she always saw the good. She was very family oriented; she loved & adored her family. Her favorite pastime was enjoying her National Bohemian Beer, (which she said saved her life as a child) and watching the Young and the Restless & the Bold & the Beautiful. Gladys had a very devoted and loving granddaughter Toya, who was the apple of her eye. Two devoted nieces, Marilyn and Netty, who loved and enjoyed taking care of her. Preceding Gladys in death was one son Anthony Johnson, grandson Tavon Garrison, two sisters Lenora Rheubottom and Josephine McCoy, one brother Joel Collins, two nieces Gwendolyn Johnson and Belinda Spencer and one nephew Robert Williams. Gladys leaves to cherish her memories one son Phillip Johnson, granddaughter Victoria Johnson-Clark (Tavon Sr.) 5 great-grandchildren; Tashauna, Tavon Jr., Tiffany, Tyrell and Terrell, one brother James Johnson of Newark, NJ, two sisters Gloria Alden and Nadine Miller, 5 nieces; Marilyn & Doreen Johnson and Lenora Borns of Baltimore, MD, Josephine Myers of Lake Placid, FL, Tyneshia Johnson of Newark, NJ and one nephew Garry Clay of Wilson NC, great-nieces , nephews and a host of other relatives and friends.

The family of Ms. Gladys Williams created this Life Tributes page to make it easy to share your memories.