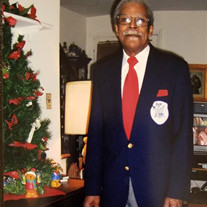 Gerald Stanley Griffin, son of the late Marshall and Emma Griffin was born in Ridgely, Maryland on July 19, 1930 and departed this life peacefully at his home on May 19, 2020. As a child, he attended the Trinity A.M.E. Church in Ridgley, Maryland. Gerald was educated in the Caroline County School Systems and later graduated from State Teachers College at Bowie (Bowie State University) in 1951 with a degree in Business of Science in Education. On April 30, 1955, Gerald was united in holy matrimony to Edna Regina Fowlkes that lasted for 65 years and from this union god blessed them with three children. Upon graduating from college, he taught for a brief period at Carver High School in Baltimore County before being drafted into the US Army in November, 1951. He received an honorable discharge after serving for two years and went on to teach at Banneker High School in Catonsville, Maryland. He later transferred to Johnnycake Jr. High School where he retired in 1982 after 32 years of teaching. After retirement, Gerald continued to work part time as a night school Principal at Johnnycake Jr. High School for 12 years. In 1975, he partnered with Thomas Cox at the Baltimore City Fair at the Inner Harbor and later the Maryland State Fair in Baltimore County where he prepared and served roast beef, crab cakes and fried chicken. Gerald enjoyed his retirement through volunteering and spending time with family. He loved the outdoors and working in his garden, cooking on the grill, as well as decorating for the holidays. Gerald was happy-spirited with his well-rounded charm. On any given day, he was fondly known as "Doc", "Daddy-O", "Grandad", "Unc", "Griff" and "Mr. G”. He was a dedicated member of the Elks Lodge for over 20 years where he became known for his famous fried chicken. He also was one of the elder members of Zeus, Inc. for 35 years until he retired due to his health issues. Gerald was preceded in death by three sisters, Nellie, Valerie, and Odella, six brothers, Marshall, Carroll, Eugene, Verdain, Lester and Vernon. He leaves to cherish his memory: his loving wife, Edna R. Griffin two sons, Gerald Stanley Griffin Jr (Jerry), Gregory Verdain Griffin, one daughter Linda Ann Griffin, one daughter-in-law, Terri Joann Griffin, one granddaughter, Myranda Nicole Griffin, one brother-in-law Thurman Eugene Saunders (Gene), and a host of nieces, nephews and friends.

Gerald Stanley Griffin, son of the late Marshall and Emma Griffin was born in Ridgely, Maryland on July 19, 1930 and departed this life peacefully at his home on May 19, 2020. As a child, he attended the Trinity A.M.E. Church in Ridgley, Maryland.... View Obituary & Service Information

The family of Mr. Gerald Stanley Griffin, created this Life Tributes page to make it easy to share your memories.