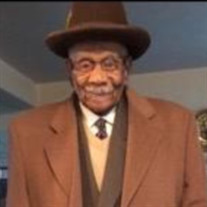 George Washington Ford, son of the late James and Fannie Mae Ford, was born on February 18, 1932 in Simpson, South Carolina. On April 21, 2020, George peacefully went to his Heavenly home to join his family members that have departed this earthly life before him. George, affectionately known as “Gee,” received his education in Fairfield County, South Carolina; in a school that went from 1st grade to 8th grade. George completed the 8th grade and began taking odd jobs to help support his family, which included his nine brothers and sister. At a young age, he gave his life to Christ and attended Calvary Baptist Church of Blythewood, South Carolina. Gee later decided to join his older brother, the late Deacon Willie Ford, in Baltimore, Maryland with the intent to bring their entire family from South Carolina to the “Big City.” George also joined his brother, Deacon Ford, by attending and becoming a member of New Elizabeth Baptist Church (NEBC) under the pastorate of the late Pastor David Boyd and continued his membership under current Pastor Wm. David Boyd, known as Brother Gee, he was a staple and faithful member. He was one of NEBC proud Octogenarian. This past February He regularly attended worship service and arrived before the church doors were open. Brother Gee will be missed sitting on the corner seat of the fourth row. Gee held several jobs that included being a delivery driver for Sack and Bober and as a driver for Able Lab, which later became Delkab laboratories. Gee loved to drive and knew his way around the DMV area; he could always tell you how to get anywhere you needed to be. George had many hobbies such as attending Pimlico Race Course. Gee always knew how to pick the ponies and it often paid off. He also held a fondness for the casinos; he made visits to Atlantic City, Charlestown, and even managed to make his way to Maryland Live. Gee was known as the bounce back kid because he survived several heart attacks, strokes and even cancer--nothing kept him down. Gee would continue to drive, even with his cane in-hand;because of this Gee was often chastised by his three sisters. Despite the weather and their warnings, even at the age of 88, he always seemed to get where he desired. His sisters spoiled him with dinner on Sundays. When they asked, “How do you feel,” he always answered with his trademark response, “I am still here.” George was preceded in death by his wife, Eleanor Ford, his son and daughter; George Ford, Linda Ford; grandson, Rodricus Milligan who held a special place in his heart; parents, James and Fannie Mae Ford; and siblings, Deacon Willie Ford, Daniel Ford, Lois McCants, and Mildred Allen. George leaves behind to cherish his memories: children: Larry, Timothy, Jerome, Leonard, Lewis, Barbara-Anne, and Darlene; daughter-in-law, Stacey; three sisters, Dorothy “Dot” Coates, Ophelia “Feety” Stanley, Ozella “Zet” Stanley, and his only remaining brother, Douglas ”Mack” Ford; a large number of 19 grandchildren, 27 great-grandchildren; a host of other relatives including in-laws, nieces, nephews, great nieces and great-nephews; and his New Elizabeth Baptist Church family.

George Washington Ford, son of the late James and Fannie Mae Ford, was born on February 18, 1932 in Simpson, South Carolina. On April 21, 2020, George peacefully went to his Heavenly home to join his family members that have departed this earthly... View Obituary & Service Information

The family of Mr. George Washington Ford, created this Life Tributes page to make it easy to share your memories.