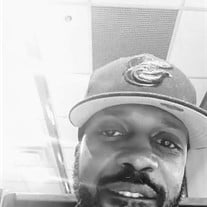 Frederick David Lamont Brown was born on September 7, 1979 in Baltimore, Maryland. He was the son of the late JoAnn Wilson Barnes and Henry William Brown, Jr. Freddie departed this life and took his flight into eternity on June 11, 2020, after a long battle with renal failure. Freddie, or Paperboy Brown, as he was affectionately called was educated in the Baltimore City School System. He received his high school diploma on June 30, 2000. Freddie also received a Certificate for Technical Achievement for building maintenance in May 2001. Freddie was a former employee at Under Armour. At an early age, Freddie attended St. Paul Apostolic Holiness Church, Inc., under the pastorate of Pastor Winnie Gilliam. He was also a member of the Alpha and Omega Choir, as a youth there. Freddie enjoyed working with his hands and hanging out with his friends and several of his cousins. Two of his best friends he enjoyed being with were Teron and Shannon Cunningham., whom he once said were, ‘brothers from another mother’. Freddie also enjoyed spending time with his maternal grandfather, Joseph B. Wilson. Freddie was preceded in death my his mother, JoAnn Barnes, whom he loved dearly; his father, Henry William Brown, Jr; two brothers, Henry Brown, III and Alfred Brown; his maternal grandmother, Patsy Wilson; and, his paternal grandparents Elsie Brown and Henry William Brown, Sr. He leaves to cherish his memory: His stepfather, Emmanuel Barnes; a sister, Anita Golphin, his maternal grandfather, Elder Joseph B. Wilson; three nieces Alicia, Latisha and Autumn; two nephews, Anthony and Charles; his devoted aunt and uncle, Thedora and Raymond Moore, Sr.; and, a host of cousins and other relatives and friends. To every thing there is a season, and a time to every purpose Under the heaven: A time to be born, and a time to die: A time to plant, and a time to pluck up that which is planted. Ecclesiastes 3:1-2

Frederick David Lamont Brown was born on September 7, 1979 in Baltimore, Maryland. He was the son of the late JoAnn Wilson Barnes and Henry William Brown, Jr. Freddie departed this life and took his flight into eternity on June 11, 2020,... View Obituary & Service Information

The family of Mr. Frederick David Lamont Brown, created this Life Tributes page to make it easy to share your memories.

Frederick David Lamont Brown was born on September 7, 1979 in...