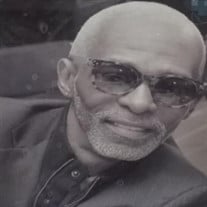 Freddie West known to many as Romie, son of the late Lucille Cooper and Willie West was born October 4, 1955, in Baltimore, Maryland. He departed this life on September 4, 2021. Freddie (Romie) received his education from the Baltimore City Public School System. He graduated from Douglas Senior High School. Following his graduation, he joined the United States Army where he was honorably discharged. Romie worked for the VA hospital until his early retirement. He was affectionately known, loved family gatherings, and enjoyed socializing. Once he became your friend, he remained your friend forever. He was passionate about the way he looked, and it was not unusual to see him dressed from head to toe in his Sunday’s Best. Romie was very family oriented. He shared an unbreakable bond with children and his grandchildren. He spoke of them often and was very proud of each of them. He loved his siblings and since his mother’s passing, he made it a point to stay connected with each of them. Romie would call his family daily if it was no more than to say, “I love you.” He had the biggest heart and wanted nothing more than to be loved the same way he loved others. Romie made friends wherever he went. He was considered a social butterfly, a jokester, and the life of any party. He was loved and admired by many. Preceding him in death are Lucille (Mother), Elwood Jerome Cooper (Father), and Shirley West (Wife). Romie leaves to cherish his loving memory, his children Tabatha (Dennis) Walker and Freddie West II; his grandchildren Ronnae Berry, Ronnie Berry, Antione Berry, Dylan Walker, Brittany Barfield, Dennis Walker III; his great granddaughter Symphony Adams; his siblings Ruth (Phillip) Gerald, Patricia (Frank) Butler, Silas West, Viola (Robert) Bomar, Fannie Boone and his closest friends Saundra, Carla, and Tammy along with a host of nieces, nephews, and friends.

Freddie West known to many as Romie, son of the late Lucille Cooper and Willie West was born October 4, 1955, in Baltimore, Maryland. He departed this life on September 4, 2021. Freddie (Romie) received his education from the Baltimore City... View Obituary & Service Information

The family of Mr. Freddie Jerome West, created this Life Tributes page to make it easy to share your memories.

Freddie West known to many as Romie, son of the late Lucille...