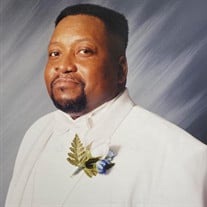 On Saturday, April 17, 2021, Deacon Frankie Carl Peele was called from labor to reward. He was born to the late Robert and Christine Peele on August 29, 1949, in Oak City, North Carolina; the 9th of sixteen children. He was preceded in death by his wife Pauline Lillie Peele; his son Frankie Carl Peel, Jr.; four brothers Marvin Peele, Matthew Peele, Harry Peele and Archie Ray Peele; two sisters Hattie Chukwujiorah and Neshorne Peele and one nephew Noah Clark. Frankie was educated in the public school system where he graduated from West Martin High School in Oak City, North Carolina. Frankie was a very pleasant person who loved spending time with family and friends. He loved eating and watching football. One of his favorite dishes was his wife's chicken salad. He enjoyed listening to family jokes. Frankie was married on August 9, 1995 to the late Pauline Lillie Peele. Frankie’s favorite thing to do was serving the Lord. Going to bible study, singing with the Male Chorus and worshipping God on Sundays. He was a faithful member of Mt. Carmel Baptist Church for over 21 years where he served as a Deacon, under the leadership of Bishop Dr. Gillard. Frankie was employed by Towson State University for 21 years as a Grounds Man, until his retirement. Frankie was a dedicated family man; his greatest love was for his wife and children. His heart was broken on April 13, 2015 when his youngest son “Little Frankie” passed suddenly and in 2016 the passing of his wife. Now they are reunited forever. All who shared his life will truly miss him. Remaining to cherish his memories are his son David Brown; three sisters Annice Peele and Gwendolyn Pinson - Fayetteville, NC and Janie Lynch (Barnette) - Gastonia, NC; six brothers Marshall Peele (Doreatha) - Charlotte, NC, Charles Peele (Zandra) - Fayetteville, NC, Gary Peele - Rocky Mount, NC, Robert Peele - Tarboro, NC and Howard Peele - Garner, NC and a host of nieces, nephews, cousins and many, many friends. Frankie Peele will truly be missed. Rest in Peace Dear Frankie Lots of Love - Your loving Family

On Saturday, April 17, 2021, Deacon Frankie Carl Peele was called from labor to reward. He was born to the late Robert and Christine Peele on August 29, 1949, in Oak City, North Carolina; the 9th of sixteen children. He was preceded in death... View Obituary & Service Information

The family of Mr. Frankie Carl Peele created this Life Tributes page to make it easy to share your memories.