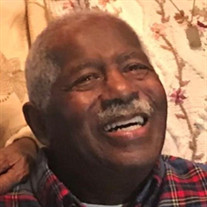 Francis Xavier Hance, the son of Kelly Hance and Evelyn Tate, was born in St. Mary’s County on March 23, 1933 and on September 27, 2021 at 3:36 AM God called him home to join his twin brother Joseph. Francis’ life was built on Christian principals and service to others. He was educated in the Baltimore City School System and worked proudly in the security field starting at Mondawmin Mall and ending his career at Towson Town Center. Consistent with his life of service, in retirement, Francis enjoyed taking care of his grandchildren, Ashaley, Dominic, Jr. and Donavan Hunter. Especially dear to his heart was his work as an active member of St. Francis Xavier Catholic Church. Francis knew and loved the Lord. Francis was a member of the Men of New Horizon, the Hospitality Ministry, and the Ushers Ministry. Francis could always be counted on to support events at the church and was known for his love of cooking. Even at home, as soon as the weather warmed up, you could find him in the backyard grilling. Francis loved traveling, watching westerns and listening to jazz. Francis served as security for the Left Bank Jazz Society and would joke that he would work there for free just to listen to the music. With his loving wife Margaret, he has travelled the world, from California, New York and Las Vegas to Cozumel and throughout the Caribbean. Francis could always be seen with a smile on his face and a good word for everyone. He is most recently preceded in death by his twin brother, Joseph, his sisters Mary Boyd and Barbara Ferguson. Francis leaves to cherish his memory his loving and devoted wife of 32 years, Margaret Hunter-Hance, his sister Elizabeth (“Aunt Johnny”) Hance and his brother Ervin Knight (Mertha); and sister-in-law Carole Belton (James). He also leaves his sons - Michael, Francis, Jr., Maurice, Tsennejhin, Alex Fox (Wanda), Jeffrey and Derrick (Skiko); Daughters, Wanda Hance-Stanford, Amelia Smith, Maudlin Johnson; Stepsons, James Hunter (Towanda), Dominic Hunter (Janice), Antaun Oliver (Lisa), Antoine Graham (Beverly); and a host of nephews, nieces, grandchildren (over 20) and great grandchildren (over 50), relatives, friends and his dedicated caretakers, Charles, Buster and Latonya Everett who supported him in the final years of his blessed life.

The family of Mr. Francis Xavier Hance created this Life Tributes page to make it easy to share your memories.