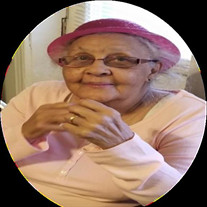 Floretta Irene Hill, the daughter of the late Revered Thomas Johnson, Helen Johnson, and step-mother; Odessa Johnson, was born on February 10, 1930, in Baltimore, Maryland. She received her education in the Baltimore City Public School System. She was united in Holy Matrimony with the late Charles S. Hill Sr. on August 23, 1946. From this union seven children were born. She was an integral part of her husband’s Roto-Rooter business as a Chief Financial officer and as central supply technician at Bon Secours Hospital until she retired. She joined Leadenhall Baptist Church on November 6, 2011. Two main hobbies of hers were sewing and making ceramic figures. She made pants and vests for her sons and would help her daughters finish clothing that was started in their home economic classes at school. During the holidays her grandchildren would try to guess what ceramic piece they would get from her. Some still have her famous pieces placed around their homes. She will be mostly remembered for her compassion for others and funny sayings like “Do what I say and don’t ask no questions” or “Ima whip your tail” (she instilled a high sense of family in her children). In her later days, she would always thank her children for everything they did for her. Floretta was a devoted wife, mother, grandmother, great grandmother and great-great grandmother and will be deeply missed by her family, friends, and all who knew her. After living a full vibrant life, Floretta Irene Hill leaves loving memories to her four daughters; Charlotte Ludd, Charlene Jackson (Nikki), Jacqueline Harrison, and Natatcha Hill; her three sons, the late Charles Jr., William and Christopher; one son-in-law; Wayne Jackson; two daughters-in-law; Constonese (Connie) and Sharon; eighteen grandchildren, thirty eight great grandchildren, five great-great grandchildren, two sisters, one brother, one sister-in-law; Shirley Gordon one brother-in-law; William Hill and a host of nieces, nephews, cousins, and many friends.

The family of Mrs. Floretta Irene Hill, created this Life Tributes page to make it easy to share your memories.

Floretta Irene Hill, the daughter of the late Revered Thomas...