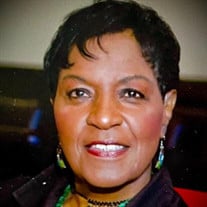 On February 14, 2022, Valentine’s Day, at the age of 87, Florence Christine Lee, devoted wife and mother of four sons passed from this life into eternal rest with God. Florence was born on Thursday, March 15, 1934 to parents James Louis and Cecelia Rita Griffin in Baltimore, Maryland. She was the fourth of thirteen siblings. Florence attended St. Peter Claver Catholic school, where she graduated in 1951. Shortly after she attended and completed Cosmetology school in 1952. In 1949, while in High School, Florence met John Avon Lee, the love of her life. They dated and after John returned from military service they were married on April 27, 1957 at St. Peter Claver. Florence and John later had four boys born to them: David, John (Johnny), Dale and Troy. In 1955 Florence went to work at Jenkins Memorial as a nurse’s aid. She was recognized for her dutiful and compassionate care of the residents there. Florence discontinued her work to be at home and raise her boys. After her youngest began high school, Florence returned to Jenkins memorial and retired from there in 1998. In 1968, Florence attended St. Ambrose Catholic Church and was an active member. She sung on the choir for many years and was a part of the prayer outreach. During that time Florence modelled and was featured at various events. Florence answered God’s call to salvation in 1979 along with her husband. Later in 1998, Florence and John joined New Covenant Tabernacle under the leadership of Pastor Tom Schwind and became active in the music ministry as well as outreach and the prison ministries. They were affectionately known as Pop Pop and Nana to the children. In 2007, the Lord ended that season and led Florence and John to Christian Life Church, where they both joined the Family Bible Study, Prison ministry and Senior’s Choir. Florence, also known as “Chudy” deeply loved her family members and very devoted to her husband and children. She always had a very strong resolve and was determined to keep her family close. She was fun loving, yet classy, comical, yet serious about her walk with her Lord and Savior Jesus Christ. She would constantly tell her children, “You pray and trust God for everything!” Florence is survived by her sons, David, Johnny, Dale and Troy, three daughters-in-law, Leslie, Jeana and Sharon, six grandchildren, John, Devon, Corey, Laurie, Tiffany and Devan, a great-grandson, Caleb, five sisters, four brothers and a host of other loving family members and friends. “For I am convinced that neither death, nor life, nor angels, nor principalities, nor things present, nor things to come, nor powers, nor height, nor depth, nor any other created thing will be able to separate us from the love of God that is in Christ Jesus our Lord.” - Romans 8:38, 39

On February 14, 2022, Valentine&#8217;s Day, at the age of 87, Florence Christine Lee, devoted wife and mother of four sons passed from this life into eternal rest with God. Florence was born on Thursday, March 15, 1934 to parents James Louis... View Obituary & Service Information

The family of Mrs. Florence Christine Lee created this Life Tributes page to make it easy to share your memories.