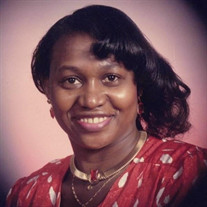 FAY IONIE DESILVA - CLEMONS, 71, of Baltimore, Maryland, was born in Kingston, Jamaica on July 16, 1950. She was valedictorian of her high school class at Seaward All-Age School. She completed her GCE A Levels and went on to earn her bachelor's degree in Accounting from Kingston Technical High Evening Institute and worked for several years at C.C. Martin Accounting Firm in Jamaica. Fay loved attending Church. She accepted the Lord at Marverley Gospel Hall Brethren Assembly; later, she attended Triumphant Church of God. She fell in love with Winston Tomlinson, with whom she had her first child, Mario DeSilva, in February 1975. While in Jamaica, she met Everton Douglas and later resided in the United States in 1978. In July 1979, she delivered her second son, Vaughn Douglas. In July 1983, she returned to Jamaica and married Everton Douglas. During this period, she attended Baltimore Central Church of God. After several years, her marriage to Everton ended. She worked at Classic Cooperation in Jessup, Maryland, and earned her MBA from the University of Baltimore. In August 1994, she married Richard Henry Clemons. That union gave Fay another son, William Clemons. She was later employed at The Department of Education as an Accountant and promoted to office manager. She got sick and retired early. Fay had a “can do” attitude and a firm belief in the power of education. Though life threw her some curveballs, she always seemed well up to the task of meeting those challenges and the ones she set for herself. During her illness, Fay made a complete shift and studied Nursing at Johns Hopkins University, Baltimore, and graduated with her LPN license. She worked at Good Samaritan Hospital but then became ill and was hospitalized. Afterward, her husband Richard took ill and not long after, died on January 9, 2016. Fay was heartbroken and did her best to cope with the loss of her husband and best friend. A dedicated mother, Fay worked long and hard to provide a good life for her children. She was a talented florist. She was passionate about making floral arrangements for banquets, weddings, funerals, parties, and fashion shows. No occasion was too large or small, and everyone loved her arrangements. One of her desires was to own a Banquet Hall. Fay spent a lot of time in and out of the hospital over the course of several years. Always the fighter, we had every confidence that she would soundly defeat her illnesses. We knew that she had so much more to give, to teach, to share with her grandchildren, that it just had to come out OK. Somehow it didn't. She leaves to cherish her memories her sons, Mario, Vaughn, and William; her daughters-in-law, Denise Douglas and Chauncey Clemons; her two lovely grandchildren, Nathaniel and Nia, whom she loved dearly; four sisters, Min. Lorna Rolle, Dr. Lorraine Crawford, Christine Campbell, and Dr. Angela DeSilva-Montaque.; three brothers, David, Daniel, and Michael DeSilva; four brothers-in-law, Fredrick Hall, Timothy Crawford, Hemerde Campbell, and Weston Montaque; two sisters-in-law, Violet and Vinetta DeSilva; 21 nieces, 14 Nephews, 15 grand-nieces, 11; and 4 Godchildren, Jacqueline Moodie, Leroy Satchell, Jr., Aliyah Stanford, and Crystal Henry. We miss her, our sister, her spirit dulled to a whisper. Missing our mother, but in Heaven, she fits in better. Missing our grandmother, who won't be here to see us grow. Missing our friend, where a special place in our hearts glows. Fay is now at peace, joining her parents and older sister Miriam Hall. GONE TOO SOON, Fay; you will be greatly missed!

FAY IONIE DESILVA - CLEMONS, 71, of Baltimore, Maryland, was born in Kingston, Jamaica on July 16, 1950. She was valedictorian of her high school class at Seaward All-Age School. She completed her GCE A Levels and went on to earn her bachelor's... View Obituary & Service Information

The family of Mrs. Fay I. DeSilva-Clemons, created this Life Tributes page to make it easy to share your memories.