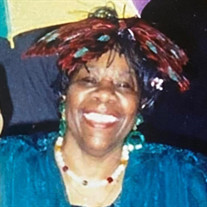 Phelisia Isabel (Esther) Wright (Fleming) was born on April 16, 1928 in Atlantic City, New Jersey to the late George and Alice Fleming. She peacefully departed this life on July 26, 2021 after a short illness. Esther and her mother moved to Baltimore City, Maryland in 1930, they later settled on Columbia Pike in Elliott City in 1936, a few blocks from the Historic Main street.  Esther’s mother Alice was employed as a live-in domestic, so Esther boarded with various relatives during her younger years. During a visit, one of her mother’s employers re-named her “Esther” from the Bible “The Book of Esther.” She was unofficially christened Esther from that day on.   Esther was educated in Baltimore City Catholic schools and graduated from St. Francis Academy in 1947. She enjoyed reading, writing, and History was her favorite subject. She continued this interest throughout the rest of her life. She was joined in marriage to the late Alexander Wright Sr on June 30,1947 by Father Roberts at St Paul Catholic Church in Ellicott City, Md, they settled in West Baltimore on Payson St and raised eight children, Phelisia, the Honorable Judge Alexander Wright Jr, Arlene, twins Gerald and Girard, Dexter, Lareda (Vicki) and Kenneth (Mark).  Esther was a homemaker until she began employment as a Aide at the Rosewood State Hospital Center in Reisterstown, MD in 1963. She retired In 1991 after 27 years of extraordinary service.   She also a member of neighborhood clubs and various Auxiliaries and organizations in several churches throughout Baltimore City. Due to her fondness and efficiency in writing, she was appointed Secretary for many of these organizations. She enjoyed socializing and participating in church activities and events.  Esther joined St Gregory the Great Church in 1951. Esther a devote Catholic and was strong in her faith. She loved to sing and was a member of St Gregory the Great choir.   She also loved to travel, and was blessed to travel all over the world.  She travelled to Rome with the St Gregory the Great Church choir in 1989 to sing for Pope John Paul II at the Vatican. She was also fortunate to sing with the Baltimore Urban Mass Choir who performed for Pope John Paul II in 1995 when he visited Baltimore and held mass at the Oriole stadium at Camden Yards.   “Queen Esther” as she was affectionately called loved to shop, dress and was a Fashionista. She loved coordinating her outfits with matching hats, gloves, jewelry, umbrellas and later her walking canes. Due to a decline in her health in 2001 she moved to the Village Oaks Senior Citizen apartment complex in Catonsville, MD but continued to be active, traveling and attending family and Church activities.  Esther had a great memory and at the age of 93 years old she still remembered everyone’s birthdays, anniversaries, and graduations. She loved her family! Each person would receive a card in the mail and on their birthday and a telephone call from her singing “Happy Birthday.”  She loved to dance and was the first one on the floor when the song “The Electric Slide” was played. In her later years when she was wheelchair bound, she would still request the song at her birthday parties and the family would dance around her. If she couldn’t attend a family event the family knew to take plenty of photos to share with her.

Phelisia Isabel (Esther) Wright (Fleming) was born on April 16, 1928 in Atlantic City, New Jersey to the late George and Alice Fleming. She peacefully departed this life on July 26, 2021 after a short illness. Esther and her mother moved to... View Obituary & Service Information

The family of Mrs. Esther Isabelle Wright , created this Life Tributes page to make it easy to share your memories.