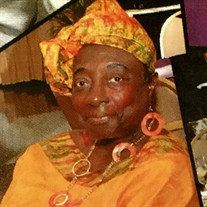 On Thursday, January 6, 2022, the portals of heaven opened, and Ms. Erma Jean Williams heard the sweetest voice of Jesus calling she answered His call and calmly went to her heavenly home. Erma was born on August 3, 1942, in Tallahassee, Florida, the oldest of eight children born to the Late Mrs. Acquilia Cochran Paremore and her father, who raised her, the Late Mr. Nathaniel Paremore, Sr. Erma’s education began at the Bond Elementary School on Saxon Street, which led her to become a graduate of Florida Agricultural Mechanical University Demonstration High School, then to a Bachelor’s Degree in Early Childhood Development from Florida Agricultural Mechanical University (FAMU); and finally, a Master of Social Work from the University of Maryland as a Licensed Social Worker (LSW). She was employed as an elementary school teacher in Statesboro, Georgia for several years before moving to Baltimore MD. Erma later became a Caseworker Associate with the Department of Social Services in the Clifton/Mount Royal District. After obtaining her License in Social Work Erma was Supervisor of the Teen/ Foster Care /Adoption Unit; their focus was on re-uniting children to their birth parents or Foster Care. Erma was a dedicated and passionate committee member of Black Adoption Recruitment Network (BARN) which involved educating the community about the many Black Children in Maryland who wait for adoptive families. Erma was a self-made activist, always seeking to help others, never a dull moment! For many years, she was a part-time evening social worker employee at the University of Maryland Emergency Center in Baltimore, MD. Because of her warm friendly personality, she met many friends at each of her tenured jobs and most of friendships lasted until her demise. Erma’s Christian life began at an early age, she had a personal relationship with Christ which began at the Greater Mt. Zion Primitive Baptist Church in Tallahassee, Florida under the tutelage of the Pastor at that time, the Late Rev. George H. Wilson. Upon moving to Baltimore, Erma attended the Mt. Moriah Baptist Church in Baltimore, MD before uniting with the Good Shepherd Baptist Church under the founding Pastor the Late Rev. Eugene V. Carter; there she attended from the mid nineteen seventies singing on the choir, serving as a Missionary, attended Adult Sunday School, Progressive Senior Ministry, and the Wednesday noon day Bible class remaining a devoted and faithful member until she transitioned to her heavenly home. Erma loved to travel extensively to South of the Border, SC, Atlantic City, NJ, Trinidad, St. Thomas and the Virgin Islands and Toronto, Canada. Her son, Bryan, her niece Danessta and Jimmy made a lot of trips during the summer months. Erma loved to read, word puzzles, movies, summer festivals, gardening and both cats and dogs family members. For many years, she maintained a small garden on the side of her house, and everyone looked forward to her yearly fourth of July and Labor Day cookouts. She always included time to swimming and water aerobics at both the League for People with Disabilities; and enjoyed the heated pool at Kernan University of Maryland Rehabilitation and Orthopaedic Center. Lastly, Erma love to cheerfully give annually monetary gifts to many local charities and organizations including four of her most favorites “Maryland Food Bank”, “Associated Black Charities”, “Salvation Army” and “Paralyzed Veterans of America”. Erma Jean Williams was preceded in death by her parents, the Late Mr. and Mrs. Nathaniel Paremore, Sr. three siblings, Nathaniel, Jr., Randall and Linda and a special Aunt Mealer Bell Richardson She is survived by her beloved son Bryan D. Williams, Three sisters, Barbara Bellamy of Baltimore, Gail Brown (Richard) and Laurina James of Tallahassee, Florida, niece, Danessta Paremore and nephew, D’Andre Moye of Baltimore, niece Kimberly Fitzgerald and her son Kaleb Fitzgerald of Washington, D.C., several cousins Alberta Simmons, Faye Oliver and Bernardo Pye of Tallahassee, Florida, Gary Jones & Family of Savannah, Georgia, Greg Jones of Crestview, Florida, Levi, Sr., Lisa and Levi, Jr. of Miami, Florida., Robert, Nicholas, Nichole, and Leo of Tallahassee, Florida. Erma lived a blessed life based on God, always sharing with her family, neighbors, friends, employees and others with visits and tokens of love throughout her life.

On Thursday, January 6, 2022, the portals of heaven opened, and Ms. Erma Jean Williams heard the sweetest voice of Jesus calling she answered His call and calmly went to her heavenly home. Erma was born on August 3, 1942, in Tallahassee, Florida,... View Obituary & Service Information

The family of Ms. Erma Jean Williams created this Life Tributes page to make it easy to share your memories.