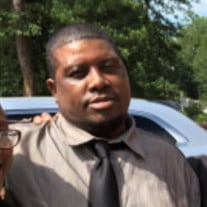 Eric (Big “E”) Lesane was born in Sumter, SC on July 13, 1965 to the late James Lesane, Jr. and the late Ellen Lee (Lawson) Lesane. He departed this life on May 27, 2020 and gave his life to God. Eric began public school in Sumter, SC before attending school in Washington, DC and then attended schools throughout Maryland earning a General Education Diploma. He worked numerous locations within Baltimore City to include Dukeland and Pall Mall Nursing Homes, as well as employed with various construction companies. Eric was a very creative and imaginable man with great dreams. He was extremely sociable and attracted lots of friends. Eric made people feel like they were number one and the only one whenever he crossed their paths. He enjoyed writing poems and raps, reading comic books, watching wrestling and western movies. He never had a problem of expressing and showing his love and support. Eric spent his last years, doing his hardest to put all of his effort and support into helping his children as well as his grandchildren. This was something that he loved and enjoyed doing even if it stressed him out. You would not be able to tell if he really had a problem helping you because he never said, “No.” He liked being a provider and the one you can go to for anything in life. He helped support and maintain and made several households financially stable, emotionally stable and physically stable. He was so compassionate and empathetic to the problems people were facing and going through. He did what he could regardless of his own situation and position in life. That’s the love, grace and mercy of God he received and then reciprocated to others. He always gave juicy kisses and believed one love forever. Preceding him in death were his parents Father James Lesane, Jr.; his mother, Ellen Lee (Lesane) Brunson and step-father, Norwood Brunson; his older brother, David E. Lesane; and his endearing heart, Patty Shipman. Whether near or far, you can count on Eric to be the best supporter and provider. He leaves to cherish his memories his one and only sister Linda (Fort Knox, KY), his children Eric, Erica, Linda, Precious, (all of Baltimore, MD), Demeshia (Atlanta, GA), Dionna (Baltimore, MD), and Keshawn Lesane (Fort Knox, KY); his Grandchildren Daniaja, Noel, Adrionna, Amiya, Amelia-Rose, Cali, Payton, Dontaja, Nigera, Grandsons Dontay, Drew, Demetrius, Jayden, Nigel, William Jr; three Aunts: Shirley L. (Willie) Battle (District Heights, MD), Johnnie Mae Lawson (Baltimore, MD) and Dora Dean Lawson (Mayesville, SC); two nephews: David and Davon Lesane (both of Baltimore); two nieces Nicole Renee Matthews (Owings Mills, MD) and Ellen Nichole Aboko of Fort Knox, KY; his loving companion Lisa Means (Baltimore, MD); two stepsons: Gregory and Isaiah, five stepdaughters: Jessica, Lexus, Emani, Destiny, and Jaylaa; God-daughters Logan and La’Riyah and a host of step-brothers, step-sisters, cousins, other loved ones and friends.

The family of Mr. Eric Lesane, created this Life Tributes page to make it easy to share your memories.