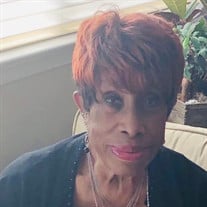 Emma Lee Richardson was born on July 22,1940, from the union of her Father "Doc" Rollins and Essie Rollins. In her youth she grew up on the east side of Baltimore City on Hoffman Street along with her sisters Gertrude Patterson, Dorothy Pinder, Estella Brown, Lydia Rollins, and her brother Charles Rollins.  Emma's education was obtained through the Baltimore City Public School System where her fondness  for writing poems was born. Mrs. Richardson joined Leadenhall Baptist Church where she sang on the choir and was married to Mr. Clifton Richardson Sr., the “Love of her Life". The union of the two would extend over 45 years of marriage, from which the birth of her 7 children yielded, Kim Marie Richardson, Avis Euniece Lambert, Clifton Richardson Jr., Aaron Dermont Richardson, Terrence Richardson and Yvette Emma Shelton. Mrs. Richardson raised her children to believe and trust God for all things. This is a lesson that all her children hold near and dear to their hearts to this very day. Emma Richardson had a true love for music and could spend hours listening to anything from "oldies but goodies" to all facets of gospel and contemporary gospel music. Listening to gospel music would become her healing balm and source of peace in all seasons of her life. Nothing made her happier than to be with her family on every occasion, joking and talking about the "good ole days" and any memory that would render a big laugh, like the known fact that we knew mother had a huge baseball crush on Eddie Murray, the first baseman for the Baltimore Orioles. It was no secret that "purple" was her favorite colors so when the Ravens were playing she would be front and center wearing purple or her Raven's Jersey. Mrs. Richardson would often say to her children as they departed from a visit to her home, "Don't say goodbye, I will see you later - If God willing". So it is at this Celebration of Life for Emma Lee Richardson that we, her children and entire family, mimic those words we have heard all our lives from her " Don't say Goodbye - We will see you later - If  God’s willing". Emma Richardson leaves to mourn her only living sibling, Charles Rollins; one sister-in-law, Dorothea Carter; two brothers-in-law, Elwood Richardson and Andrew Richardson; one daughter-in-law, Tina Richardson; three sons-in-law, Darryl Sydnor, Torrance Shelton, Lannie Lambert; nieces, nephews and host of grand and great grandchildren.

Emma Lee Richardson was born on July 22,1940, from the union of her Father "Doc" Rollins and Essie Rollins. In her youth she grew up on the east side of Baltimore City on Hoffman Street along with her sisters Gertrude Patterson, Dorothy Pinder,... View Obituary & Service Information

The family of Mrs. Emma Lee Richardson created this Life Tributes page to make it easy to share your memories.