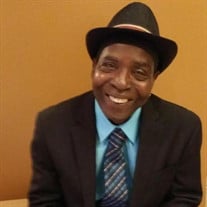 Elon Levi Joseph Wizzart, lovingly known as &#8220;Nick&#8221; was born to the late Joseph and Lurline Wizzart on August 26, 1955 in Jubilee Hospital in Kingston, Jamaica. He was the third child of five. He transitioned to be with the Lord... View Obituary & Service Information

The family of Mr. Elon Levi Joseph Wizzart created this Life Tributes page to make it easy to share your memories.