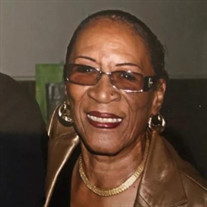 On the morning of January 9, 2021, Ella Louise Wells took the Master’s hand and entered the eternal realm called Heaven. Ella Louise was born on November 14, 1943 to the late Ernestine Wallace Mayberry and the late Robert Cole-Bey, Sr. Ella had three siblings who preceded her: William Wallace Harris; Robert Cole-Bey, Jr.; and Rachel Cole-Bey. Ella spent her formative years between Baltimore, Maryland and Suffolk, Virginia. Education was a significant part of her life, and she received her education in the Baltimore City Public School System. Ella would graduate from Dunbar Senior High School in Baltimore, Maryland. Even after finishing high school, Ella continued learning and acquiring knowledge. In addition to expanding her mind, Ella was a person with a strong work ethic. She was a loyal employee of Western Electric for twelve (12) years, leaving only after illness caused her to retire. “A wife of noble character who can find? She is worth far more than rubies.” Proverbs 4:7 (KJV) Ella would meet and fall in love with John Henry Wells. They married on July 26, 1969. The two of them formed an inseparable bond. John often referred to Ella as the love of his life. Not only was she the love of his life, but he would state that she was his life! They would be married for 52 years in July of 2021. This is indicative of a union blessed by God! Moreover, Ella’s love would include the love of children. This prompted her to adopt two girls who would become part of the Wells family. Melissa and Chenniah, two daughters who loved and adored their mother. She, in turn was proud of her daughters and often spoke lovingly of them and their accomplishments. As Melissa says…”You chose me, you loved and nurtured me; I’m forever blessed to have been able to call you Mom, and your love will live on inside of me…Always.” “… and now, my daughter, fear not: I will do to thee all that thou requires: for all the city of my people doth know that thou art a virtuous woman.” Ruth 3:11 (KJV) Ella Wells had a heart of gold. She was kind and would give unconditionally of her time and resources. Everyone was welcomed into her home. Moreover, she was often caring for the welfare of others. Her concern for others was limitless. This concern extended to close family members, friends and even strangers. Her love of God motivated her interactions with others. Ella was a dedicated and faithful long-time member of her church (Mt. Olive Freewill Baptist Church). Ella Wells was very creative and talented. She not only had a strong and lovely alto voice, but she also had a magical touch with decorating and making floral arrangements. She was a Wiz in the kitchen and often prepared delicious culinary delights! Ella would sometimes share her recipes with her grand-daughter, Noelle. Ella’s grandchildren were the “Apple of her Eye!” Her eldest grandchild was her Tugga-Tugga. She devoted a copious amount of love and devotion into all of her grandchildren’s spiritual and educational development. She also could be stern, if needed. But, the correction and advice she gave to them was from a place of love. The memories of a good person lives on in our hearts! Ella Louise Wells leaves precious memories of her life on Earth: her husband, John Henry; two daughters, Chenniah Patrick (Kuroji) and Melissa Crockett; six grandchildren, Jazae Jonathan Jackson, Israel Joshua Crockett, Noelle Elice Crockett, Zamora Muse Patrick, Malcolm X. Patrick, and Jha’ Nazia A. Patrick; two sisters, Valarie Denise Lambert (Virginia) and Angela Vernell McKenny (Virginia); one brother, Garrick Keith Lambert (Virginia); two aunts, Dorothy Spence (Suffolk, Virginia) and Barbara Jean Thompson (Philadelphia, Pennsylvania); one uncle, James Thompson; four sisters-in-law, Jean A. Wells, Willie A. Wells (Judy), Patricia A. Wells, and Elizabeth Wells; one brother-in-law, Jeffrey T. Wells; a devoted niece, Crystal A. Wells; a bonus son, Dana Crockett; and, a host nieces, nephews, cousins and friends.

The family of Mrs. Ella Louise Wells, created this Life Tributes page to make it easy to share your memories.