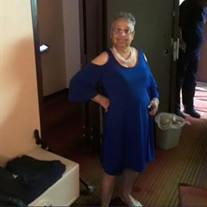 Elizabeth Jean Harris was born on May 10, 1948, in Albany, New York. She was the first born of the late Lovie Sue and Connie Torain Sr. She answered God’s call on Wednesday, May 20, 2020, after a lengthy illness. After moving from Albany at the age of eight, Elizabeth, who was affectionately known as “Liz”, received education through the Baltimore City Public School System. She moved to Chicago in 1967 when she married Walter “Luke” Harris Sr. She gave birth to three daughters (Lovie, Francine, and Rhonda) and one son (Walter Jr.). While living in Chicago, she held many positions that consisted of sharing her love and kindness with others. Liz was a member of Mt. Vernon Baptist Church, under the leadership of Reverend J. L. Miller, until her illness prevented her from attending service. One of Liz’s favorite activities was planning family gatherings and hosting family reunions for the Torain Family. Family was a big deal for her. She remembered all important dates from birthdays to anniversaries, no matter how young or old the family member. She would call to remind you that it was “so and so’s” birthday just to make sure you reached out to send your wishes. Liz adored her conversations and the company of her grandchildren and great grandchildren. If there was someone you needed to lend a helping hand, Liz was the one to show up. Liz will be missed sincerely by everyone who knew her; she was a devoted wife, mother, grandmother, sister, aunt, cousin and true friend. As we grieve the sunset of her bright light, she joins her mother (Mrs. Sue), father (Mr. Connie), one sister (Debbie), four brothers (Sigfried, Rowland, Monroe, and Ray). She leaves to cherish her legacy: her loving husband, Walter Sr. (Luke), three sisters, Jeanette, Lessie and Tangie, three brothers, Connie Jr., Vincent (Deborah), and Jeffery (Denise), four children, Lovie, Francine (Melvin), Rhonda (Aaron), and Walter Jr., ten grandchildren, Shantell, Donny, Aaron, Kevin, Dashi, Xavier, Crystal, Kim, Walter III and Samora, fourteen great-grandchildren. A host of nephews, nieces, other relatives and friends.

Elizabeth Jean Harris was born on May 10, 1948, in Albany, New York. She was the first born of the late Lovie Sue and Connie Torain Sr. She answered God&#8217;s call on Wednesday, May 20, 2020, after a lengthy illness. After moving from Albany... View Obituary & Service Information

The family of Ms. Elizabeth J. Harris created this Life Tributes page to make it easy to share your memories.