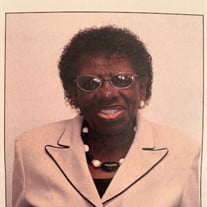 ELIZA JANE TYLER WILSON entered into eternal peace on Monday, December 21, 2020. Eliza was born on January 6, 1927 daughter of the late George and Florence Tyler. Eliza was born in Towson, Maryland. She was the tenth (10) child of eleven who preceded her in death. She received her education in Baltimore County Public School System. She graduated and received her diploma from Carver High School of Towson, Maryland in June of 1944. She was employed at Hutzlers Fountain Shop while she was attending high school. Then she was employed at Reed Fountain Shop for a few years. She began her career in domestic work and remain close to the children until the day the Lord called her home. In the 1970’s she began working at Overlea Caterers and retired from there in 1983. Eliza accepted the Lord Jesus Christ in her life at the age of 16, and was baptized by the late Nobel Toyer of the Mt. Oliver Baptist Church. She sang on the Junior Choir, and taught the Beginner’s Class of Sunday School. Eliza was joined in holy matrimony to the late Ural Wilson on May 15, 1949.They moved to Overlea in January 1953, and she began her Watch Care Membership with Emmanuel Baptist Church of Overlea at that time. She later joined Emmanuel under the leadership of the late Pastor Vernon Dobson. After the death of Pastor Vernon Dobson, she continued her membership at Emmanuel under the following pastors: Pastor James Burrell, Pastor John L. Clanton Sr., Pastor Andre’ Godsey Sr., and under the leadership of Pastor Gerald Watson until her death. Sis Eliza was a faithful member of Emmanuel with many years of service. She served as the financial secretary of Emmanuel under Pastor Burrell’s leadership. She taught Vacation Bible School at Emmanuel under the leadership of Pastor John L. Clayton. She sang on the Senior Choir, served as president of the choir for two years and Financial Secretary from 2004 through 2006. Eliza was a devoted wife who took care of her husband during the last five years of his life during his illness. To equip herself for the care, she took the Home Nursing Course in 1976 at American Red Cross and passed with a 93 ½ average. She was avid about crocheting. She made baby blankets, sweaters, dresses and throws for family and friends. She also enjoyed reading, gardening and eating crabs. God saw her getting tired. A cure not meant to be, so He put His loving arms around her whispered “Eliza come home to Me”. Eliza leaves to cherish her memories: her niece “Christine Butler Wright: her special niece Deborah Ann Hill also her care giver, a host of nieces and nephews. Sister in law Ruth Hall of Towson. A Special friends Crystal Chestnut, Crystal “Baby Doll” Aye, Extended special family, Peggie Glenn, Ann Lambdin, Beth Lambdin, and Thomas Dukeheart Jr. and the Vissel family. Family members of the late Ural Wilson from South Carolina. A host of great nieces and great nephews.

ELIZA JANE TYLER WILSON entered into eternal peace on Monday, December 21, 2020. Eliza was born on January 6, 1927 daughter of the late George and Florence Tyler. Eliza was born in Towson, Maryland. She was the tenth (10) child of eleven who... View Obituary & Service Information

The family of Mrs. Eliza Jane Wilson, created this Life Tributes page to make it easy to share your memories.