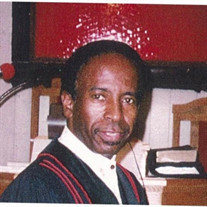 Elder David John Lemon, was born to the late John A. Lemon and Bishop Alma Dingle Lemon in Baltimore, Maryland on August 31, 1946. David had four sisters, one who preceded him in death, and one brother. Early Thursda morning, September 30, 2021, God called his son home. Elder Lemon was the son of God fearing parents who reared him in the ways of the Lord. In his youth, Elder Lemon was extra ordinary. He radiated love and quiet kindness. He attended the Baltimore Public School System, graduating from Douglass Senior High School. Through the years, Elder Lemon increased his thirst for knowledge with college academics at night. Elder Lemon started his first job after high school in 1965, but then got the call from “Uncle Sam.” He enlisted in the US Army and served in Germany until his honorable discharge on July 12, 1969. Some of his passions in life was for mechanics and sports, especially for his home team, the Baltimore Ravens. Elder Lemon had a wide range of interest that included a love for reading, especially the Bible, music, bowling, running in marathons, collecting valuable items, buying, repairing and re-selling cars, traveling, and cooking. Elder Lemon loved to cook for others. Elder Lemon was a hard worker all his life. He was employed with a number of companies, even working a part time job while working full time during the day. Elder Lemon was employed for 53 years at Kaydon Ring and Seal, Inc., a company that designs and manufactures rings and seals serving customers in the aerospace, military, commercial, oil, gas, steel and mining industries worldwide. Elder Lemon retired in 2018 as a Foreman Journeyman Machinist. He had a profound effect on everyone he met and although he never married nor had children, the children in his neighborhood loved and admired him. Elder Lemon encouraged them and frequently brought some to church for special services, fellowship services at other churches, as well as group recreational trips. Elder Lemon was a life-long member of the United Glorious Church of Christ, Inc. under the leadership of his Grandfather and founder, the late Arch Bishop Joseph E. Dingle. Elder Lemon gave his life to Christ and continued to evolve from a young Sunday School student; a member of the Metropolitan Youth Choir and United Gospel Ensemble (how well we remember his learning the lead for “Lord Help Me to Hold Out” by James Cleveland. You would hear him practicing first thing in the morning, first thing after work, and even before he went to bed); a trustee; a deacon, Assistant National Church Secretary; then into the ministry as Assistant Pastor along-side his Mother, Bishop Alma D. Lemon and then Pastor. His missionary work took him as far away as Columbia, South America several times to share the Good News. He leaves to cherish his precious memories: four devoted siblings, three sisters, Celestine and Gloria Lemon, Sue Lemon Nock, and one brother, Minister Joseph A. Lemon; two nieces, Teresa C. Nock and Nichelle T. (Leonard) Johnson; one grandnephew and grandniece, Charles and Candice; four great-great grand nephews and nieces, Christopher, Cayden, Titiana, and Alana; two sisters-in-law, Geri L. Spence, and Beatrice Ospina; one step-nephew, Juan C. Ospina; and a wonderful host of cousins, other relatives, and friends.

Elder David John Lemon, was born to the late John A. Lemon and Bishop Alma Dingle Lemon in Baltimore, Maryland on August 31, 1946. David had four sisters, one who preceded him in death, and one brother. Early Thursda morning, September 30,... View Obituary & Service Information

The family of Elder David John Lemon, created this Life Tributes page to make it easy to share your memories.

Elder David John Lemon, was born to the late John A. Lemon and...