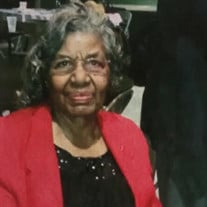 On March 26, 1928, the Lord blessed the world with Edda Louise Lane. She was the first daughter born to the late Eddie Haynes and Cora Lumpkin Haynes.  After a life of service, God chose her to return to his kingdom as one of his angels. She departed this earth on Thursday, July 8, 2021.  Edda’s life began in Athens, Georgia.  Later she moved with her parents and siblings to Lawndale, North Carolina. She then moved to Turners Station, Maryland with her cousin as a teenager where she graduated Sollers Point High School. She was married to the late William Wesley Lane and had three beautiful children, Cynthia, Ricky, and Michael.  It was during this time that she worked for Social Security Administration. After living in Turners Station, MD, Edda and her family moved to Baltimore, Maryland. In the early 1970s Edda began her journey as a consultant with Mary Kay. If you knew Edda, you knew all about Mary Kay. Even though she had naturally beautiful skin, Edda loved helping other women achieve beauty and financial freedoms through Mary Kay. She also loved to travel which she did a lot through Mary Kay or rolling down the highway with Mr. Freddie in his souped-up van. Although Edda only had three biological children, she was mother and caregiver to many. Whether you called her Ma, Mamma, or Mrs. Lane, she took care of you. She cared for her children, her siblings, their friends, and neighborhood kids alike. She was a foster mother to several. She could even be found adopting strangers she met in the store. During her later years she cared for clients in group homes as well as her own home. Edda was a member of Mount Pleasant Church and Ministries. She was no singer but if you listened carefully, you might find her humming along to a favorite song. She was also a Baltimore Orioles fan and on game nights could be found in front of the television cheering on her team. She even attended a few games in the old Memorial Stadium. She loved hosting family cookouts and in recent years friends and family continued to ask when the next cookout would take place. Always a lady, Edda never told her age. She never owned being older but would tell you she was “mature”. She battled colon cancer twice and survived a stroke. Edda was blessed to continue living independent until her final days. On July 8, 2021, while in the care of Stadium Place Nursing and Rehab Center, Edda departed her earthly life to enter her heavenly home. Edda is preceded in death by her beloved husband William Wesley Lane, son Gary Edward “Ricky” Lane, brothers Ambrous Edward “Bo” Haynes, James Daniel “JD” Haynes, Robert Benjamin “RB” Haynes, and sister Jessye Haynes Clinton. She leaves to cherish her memories daughter Cynthia Lane Douglas (Thomas) of Charlotte, NC, son Michael Harold Lane (Francine) of Baltimore, MD, brothers Louis Calvin “LC” Haynes (Christine) of Gastonia, NC, Gene Calvin Haynes of Baltimore, MD, John Adam Haynes, of Baltimore, MD, sister Gayle Renee Street (Samuel) of Baltimore, MD, and a host of grandchildren, great-grandchildren, great-great grandchildren, as well as a host of nieces, and nephews.

On March 26, 1928, the Lord blessed the world with Edda Louise Lane. She was the first daughter born to the late Eddie Haynes and Cora Lumpkin Haynes.  After a life of service, God chose her to return to his kingdom as one of his angels.... View Obituary & Service Information

The family of Mrs. Edda Louise Lane, created this Life Tributes page to make it easy to share your memories.