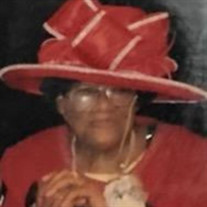 Reverend Dorothy Ramona Jones Johnson was born October 20, 1930 in Florence, South Carolina to the late Joseph Russell Jones, Jr. and Thelma Viola Robinson Jones. She attended church in her early childhood, where she united with the Trinity Baptist Church of Florence, South Carolina and remained a member in good standing. Rev. Johnson met her late husband, Clarence (Gabby) Johnson, Jr. at Wilson High School and when they were very young they joined in holy wedlock in Florence, South Carolina on June 17, 1947. They were married 60 years and from that union two children were born, Clarence Henry Johnson III and Agnes Romana Johnson both deceased. Rev. Johnson came to Baltimore in July1948. Upon her arrival to Baltimore, MD she was joined in spiritual fellowship with Gillis Memorial Christian Community Church under the leadership of the late Theodore Jackson, Sr. Rev. Dorothy Johnson became an Associate Minister of the Gillis Memorial C. C. Church. Rev. Johnson has worked in various organizations of the church. She received Christian Education at The Baltimore School of the Bible with a focus in Child Evangelism. She is noted for her community work throughout Baltimore and its surrounding areas. She has received numerous citations from three Mayors of Baltimore City and three Governors of the State of Maryland. Throughout the community, she has served as a Nursing Home Advocate. She has also worked with other organizations, such as the life Enrichment Program Life Support. Rev. Johnson has served as Chaplin for the Women’s Department of the United Council of Christian Community Churches for Maryland & vicinity, the “We Need Prayer Headquarters” and a volunteer staff clergy-woman at the Outreach Ministry of the former Liberty Medical Center. She was a spiritual broadcaster and was heard on the Salvation Hour on WJRO-AM for over 24 years and was heard broadcasting on WFBR-1590 AM. Rev. Johnson loved people and she loved the Lord. She was found anywhere there was a need to spread the gospel of Jesus Christ. She stated that she did nothing of her own, for she has been bought with a price and all that she did was done through Jesus Christ the Son of the Living God. Rev. Johnson leaves to cherish her memories granddaughter Tamar, great grandson whom she raised from birth Khalil, great grandsons Keontae, Marcellus, Michael, Messiah and great granddaughter Kanijah.

The family of Rev. Dorothy Ramona Johnson created this Life Tributes page to make it easy to share your memories.