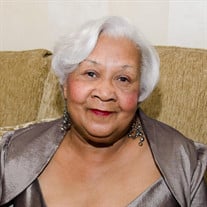 Dorothy Johnson Cooper (fondly known as Dot or Dottie) was born to the late Daniel J. Johnson “Chick” and Florence Carroll Johnson on February 1, 1944 in Baltimore, Maryland. She departed this earthly life on Wednesday, October 20, 2021. Dorothy received Christ at an early age at Edgewood United Methodist Church in Lutherville, MD and was an active member until her passing. Dorothy was on the choir, President of the Choir, a member of the United Methodist Women, Treasurer of Edgewood-Greenspring United Methodist Women’s Unit, and early in life a member of the Methodist Youth Fellowship (MYF). She graduated from Towson High School, class of 1962 and attended Cortez Peters Business College to further her education. Dorothy began her first job in Baltimore City with the Bureau of Purchasing as a secretary. She then began working for the State of Maryland with the State’s Attorney’s Office and became the supervisor of secretaries in the District Court. From there she was the first woman and African American Court Commissioner for the Baltimore County, District Court. The news article at the time stated, “Dorothy will be among a very select group of only six other females who are commissioners in Maryland’s district court system”. Dorothy retired in 2006 with a distinguished and notable career. Dorothy had a witty and spicy personality which many knew and loved. She adored her family and friends. She met the love of her life in the late Clarence Cooper Jr. who she was married to from 1983 to 1991 until his untimely passing. Through a previous union she had her only child, Robin Johnson Henry who then gave her David C. Brown, Jr. her only grandchild. In the most recent decade, she became a great-grandmother to Olivia and Madison Brown who became the newest loves of her life and who she watched often. She was a wonderful mother, grandmother, great-grandmother and “Auntie” to all who knew her. Dorothy J. Cooper exceeded by her sisters, Florence J. Mosby and Barbara J. Duvall. leaves to cherish her memories: daughter, Robin J. Henry (Larry Henry); grandson, David C. Brown Jr (Kristen Brown), great-grandchildren, Olivia Brown and Madison Brown; her uncle, Calvin Johnson; sister, Dannette J. Weems (George Weems); niece, Judy M. Broadnax; nephews, Edward Weems, Michael Mosby, Raymond Mosby, Bradley Weems, John Duvall III, and a host of cousins, great nieces and nephews, great-great-nieces and nephews and great-great-great-nieces and nephews, along with a host of friends. Dorothy’s legacy of love will live on in the hearts and minds of all who knew her.

The family of Ms. Dorothy Cooper, created this Life Tributes page to make it easy to share your memories.