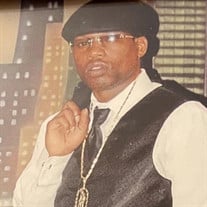 Donyill Mack affectionately known as “Wimpy” was born to the late Charles Mack and Sheila Mack, in Baltimore, Maryland. He departed this life unexpectedly on August 6, 2021. Wimpy attended St. Ambrose Elementary for a small time but went on to finish out his education through Baltimore City School. As a child his stepfather Charles Ellerba taught him how to do Home Improvement Work. As Wimpy got older he became such great at his job that he and his wife, Towanda Mack opened their own business called MACKS2MACKS, LLC. Along with loving to do Home Improvement Work, he also loved collecting fish tanks, skiing, snow tubing and dogs. Especially Diamond, his Pitbull, he loved her. Wimpy was the most playful of all his mother’s kids. He was the jokester and prankster of the bunch. He was a very giving person that would always try to help the less fortunate in the community. Wimpy kept his mom on her toes, he was the most rambunctious and energetic, we loved him for who he was. He enjoyed family as much as the next person our kindred spirit has moved on to a better place. On June 03, 2011, Wimpy married the love of his life Towanda Wright and mother of his only child (Nevae Mack) they were a happy and inseparable couple. He was a awesome father and made sure his daughter wanted for nothing. He loved spending time with his daughter. He was preceded in death, by his father Charles J Mack Sr. Wimpy leaves to cherish his wife Towanda Mack, daughter Nevae Mack, seven step kids Shalaya, Ashley, Corey, Ieshia, Markeeda and Bianca he raised and loved as one of his own children. mother Sheila Ellerba stepfather Charles Ellerba, three brothers Kenneth, Charles, and Bernard, seven sisters Kim, Ebony, Shavon, Erica, Miracle, Tasha, and Lorretta, two aunts Linda and Betty one uncle /God father Cornelious Frank. Three sister in laws Tanya, Sherree and Lisa, two brother in laws Warren and Raynard ,9 grandkids 10 nieces,13 nephews,2 great nephews and 2 great nieces one God son Kevin one god daughter Janiya and host of other family and friends. He also leaves his childhood bestfriend’s Jesus, Corey and Anissa.

The family of Mr. Donyill Mack created this Life Tributes page to make it easy to share your memories.

Donyill Mack affectionately known as “Wimpy” was born to the...