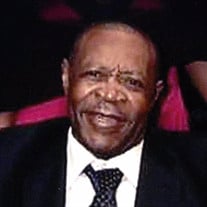 Donald Smith, first son of Ozella and Willie James Ford, Sr. was born on February 11, 1948 in Baltimore, Maryland. After an extended illness, Donald peacefully departed this life on June 2, 2020. Donald received his education in the Baltimore City Public School system. After working several small jobs, he decided to pursue his passion and became a cook at The Café De' Artistes Restaurant in Towson, Maryland where he worked his way up to being a sous chef. He was a dedicated employee working for the State of Maryland for more than 30 years. During that time, he worked as a cook at Mt. Wilson State Hospital, and Springfield State Hospital. He then moved on to The Montebello Rehabilitation Center in Northeast Baltimore, as the Head Cook. Donald was an excellent cook and made what people referred to as those "slap yo momma meals". He was best known for his cheesy, cheesy macaroni and cheese dish. Donald was dedicated, loyal and a hard worker and instilled these qualities in his two sons. While working at Montebello, Donald met and later married Suzette Ann Williams in the summer of 1982. From this union came two handsome sons, Donald Antione and Anthony Warren, who brought him extreme pride and joy. As a young boy and being the eldest, Donald was also a caretaker assisting in the care and upbringing of his siblings and various cousins. A strict disciplinarian, he held things down while his parents worked, went out on the town or just babysitting for family members. Do not get it twisted; if you didn't fall in line, you would definitely get "the knuckle". However, he would first give you a warning..."I'm about to put my foot in it". A few of his other special talents included: being able to drive a car with both feet. The right foot was for the gas and the left for the break and he never got them mixed up. He also liked to DJ using his own special tag, "The Funky Worm", who loved to keep the party going. When Donald was younger, he was often mistaken for the late comedian Flip Wilson and more recently the actor Don Cheadle. Donald had a great sense of humor, a way with the ladies and an endearing personality. In 2013, Donald joined in Christian fellowship with the Love Divine Family Worship Center , under the leadership of his sister, Pastor Delores Ford Edwards. He attended services regularly and looked forward to being with his new spiritual family. He was an active member of the LDFWC Men’s Ministry. Donald was loved by many, and will be truly missed. Donald is proceeded in death by his wife Suzette Ann Smith, and his parents, Ozella and Willie James Ford, Sr. To cherish his memory, he leaves behind his sons, Donald Antione Smith (Krista) and Anthony Warren Smith. Six siblings: David Smith, Pastor Delores Ford Edwards (Warren), Patricia Boyd, Willie James Ford, Jr., Daniel Kenneth Ford and Darrell Eric Ford (Octavia). Four grandchildren: Antione Deonta Smith, Aubrey London Smith, Autumn Reighn Smith and D'Asiya Naveah Barnes. A host of nieces, nephews, aunts, uncles, cousins and friends.

Donald Smith, first son of Ozella and Willie James Ford, Sr. was born on February 11, 1948 in Baltimore, Maryland. After an extended illness, Donald peacefully departed this life on June 2, 2020. Donald received his education in the Baltimore... View Obituary & Service Information

The family of Mr. Donald Smith, created this Life Tributes page to make it easy to share your memories.