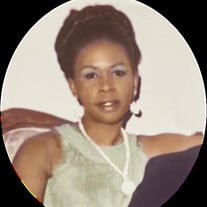 Dolores Martin McWilliams was born February 21, 1932, to the late John Albert Martin Sr. and Pauline Sarah Chew Martin. She departed this life November 11, 2021, after a lengthy illness. Dolores Martin married the late William T. Connor in 1952, and from this union was born a son, Lovell R. Connor. Dolores Connor married the late Sterling McWilliams in 1980. She received her education in the Baltimore City Public School System. She attended the University of Maryland School of Nursing in 1957. She worked in that field for 28 years. She attended the College of Notre Dame as an English Major. Dolores accepted Christ at an early age. She attended the Wilbur H. Waters School of Religion. She was ordained and licensed as a Minister of the Gospel in 2002. She served in various areas of Ministry: evangelism, prayer, teaching, and music, at Bethel AME Church, The Mount Lebanon Baptist Church, Solid Rock Pentecostal Bible Way Church, and her most recent service at the Perkins Square Baptist Church. Dolores had a great desire to share the gospel with youth, as the result, she opened her home weekly to teach the Word of God to the neighborhood children. Dolores was fun loving, outgoing, and adventurous. She had many interests: writing poems, short stories, singing, acting for amateur theatre, and dancing. She initially received formal voice and piano instruction from Josephine Turner and later from Pastor Sallie Yancy. Dolores loved her family and made great sacrifices to help wherever needed. She opened her home providing shelter, food, clothing, emotional support, and encouragement. She loved people and was very generous in providing supports for all in need. From the desk of Rev. Dolores McWilliams: I believe that everyone was created with multiple gifts, but they must be sought for. I believe that one must keep their mind on their goals and their eyes on the "Prize". I believe that I will be kept busy here on earth in a positive 'way until death comes, where I will simply fade into eternity, not even realizing that I have passed from this life; but with enthusiasm "lookup with joy" and embrace that transition that must come to all. I believe that if I greet life with joy, the good, the bad, and the indifferent, with enthusiasm, I will not have time to worry about death nor fear it. Dolores was preceded in death by her sister, Celestine Nickens, brother, John A. Martin. She leaves to cherish her memory, a devoted son, Lovell R. Connor, grandson, Patrick Kaloko (Patricia) two-great grandchildren, Jacob and Payton, and a host of loving family and friends.

The family of Mrs. Dolores Catherine McWilliams created this Life Tributes page to make it easy to share your memories.