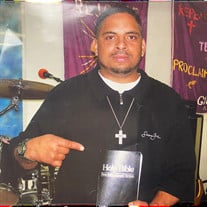 He bid no one a last farewell, he said goodbye to none. His loving heart just ceased to beat, his stay on earth was done. The complete story of a man’s life can never be attached to paper. Derek Lionel Porter, Sr., the son of James Walter and Mary E. (Hogan) Porter, was born November 23, 1966 in Baltimore, Maryland.  He transitioned from this life, at his home, on October 28, 2020. Derek grew up in the Santa Fe Community within the Park Heights Community.  He was educated in the Baltimore City Public School System.  He attended Forest Park High School. He didn’t graduate with his Class, nevertheless, he determined he would obtain a high school diploma.  Fulfilling his goal, on January 30, 1998, he graduated and received a Maryland General Education Diploma.  Derek believed you could do whatever you put your mind to do.  He graduated from Lincoln Tech for Welding and entered a career as a welder. He had exceptional skills and always did home improvement on the side. He always helped neighbors with home improvement projects. He lent his skills to community improvement projects too. In the 1980s he was a Disc Jockey “DJ”; he built radios and speakers.  He was a maintenance worker at Windsor Forest Apartments; he worked for Sweetheart Cup Company as a bailer.  Derek was deeply spiritual.  Earlier in life, he studied world religions; Buddhism was one of his favorite reads.  In the 1990s he took the Shahada, and practiced Islam for many years.  He was raised in a Christian home and in the later part of his in life he became a devout Christian.  Derek was affectionately called Big Derek.  He was a family man.  Derek met his future wife, Cynthia M. Cannady when she was 8 years old.  She would tease him and run whenever she walked pass his father’s shoe shop on Whitelock Street. In high school they became sweethearts. One day while they were reminiscing about their childhoods, Derek realized she was the girl who always teased him to which he would respond, “I’m going to get you.” On September 14, 1991 they were united in Holy Matrimony.  From this union 3 children were born: La’Toya, Derek, Jr., and Tierra.  Derek brought his daughter Toya to the marriage.   Derek was a family man.  He cherished the time he spent with his wife and children.  He will be remembered as a fun-loving, and attentive father.  He was caring and patient. He was involved in the lives of his children.  He kept them busy.  He thought if they stayed busy, they would stay out of trouble. He made sure they had activities to do on the weekends.  He enrolled them in sports, gave them projects and learning assignments to complete. Weekends was also time for family outings.  He enjoyed restaurant outings.  Derek loved and supported his children.  He shared a unique and close relationship with each of them.   To him, his daughters were the most “beautiful” daughters in the world.  Toya cared for him until the end.  He shared a special bond with his son. He was his son’s hero.  He enjoyed spending time with his grandchildren, who often visited him daily.  He was close with his parents and siblings. He loved his nieces and nephews.  Derek had a big personality.  He was intelligent, spontaneous, and kind.  He was outgoing and down to earth, a “people person”.  A natural comedian, he liked making people laugh and smile. He had a variety of interests.  Athletically inclined he enjoyed swimming and bicycling.  He also enjoyed drawing and playing chess.  Derek was a man of many words of wisdom and sayings, both serious and funny.  His favorite sayings were:  “It ain’t that kinda party.”;  “There’s only two types of people in this world, jokers and smokers.”; and it’s variant, “There’s only two types of people in this world drinkers and thinkers.”  As long as life and memory last, we will remember his big heart and big personality.   We thank and praise God for the life, work, and time we shared with our beloved, Derek Lionel Porter, Sr.  Preceding him in death:  his parents, Reverend Mary Ellen Porter and James Walter Porter ; brother, Warren Lee Porter, Sr.; nephews:  Warren Lee Porter, Jr. and Ali Hazel; niece, Lashiya Nicole Porter; paternal grandparents Walter and Aider Porter; maternal grandparents Charles Walter Hogan and Virginia Amanda Beaner; and Clifford Earl Hazel, Sr., who was like a father to him and his son Clifford Earl Hazel, Jr. Left to cherish his memory and continue his legacy are:  his best friend and soulmate, Cynthia M. Porter; his children:  Toya S. Queen; Latoya N. Porter, Derek L. Porter, Jr., and Tierra “Te Te” L. Porter; 4 grandchildren:  Lla’Khaiya C. Bethea, Khaibry M. Dixon, London Porter-Moore, and Zhahkai A. Dixon; siblings:   James “Dakota” L. Porter, Shelia L. Porter, and Amed N. Hazel, Sr.; 13 nieces and nephews:  Tiffany Nikolov, Danielle Tyson, Meghan Tyson, Christopher Porter, Katrina Wilson, Vallen Porter, Adrien Hazel Sam Porter, Jermaine Barnes, James “Little Jimmy” Porter, Morgan Porter. Amed N. Hazel, Jr., Khayri Hazel, and Khalil Hazel; a host of great-nephews and nieces, and cousins, amongst them being Bishop Willie J. Barr, Jr. and Donald Hogan, Sr. with whom he held special bonds with; other relatives and friends, including, Jessie and Kelly.

He bid no one a last farewell, he said goodbye to none. His loving heart just ceased to beat, his stay on earth was done. The complete story of a man&#8217;s life can never be attached to paper. Derek Lionel Porter, Sr., the son of James Walter... View Obituary & Service Information

The family of Derek Lionel Porter Sr. created this Life Tributes page to make it easy to share your memories.

He bid no one a last farewell, he said goodbye to none.
His loving...