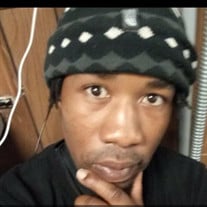 Dennis Mann Jr. the son of Angela and Dennis Mann Sr was born on June 28, 1988 in Baltimore, Maryland. Dennis departed this earthly life, for his heavenly home on August 232020.Dennis was affectionately acknowledged by his nickname "Dj." He received his education in the Baltimore Public School system. Dj worked for Civic Works in 2007 where he did landscaping. His most recent job was at Bakery Express. Dj was baptized in 2013 at Southern Baptist church under pastor Donte Hickman. Dj had a smile that would light up a room. Back in Dj's younger years, he had a talent for banging on buckets. Every neighborhood that he resided in he would find him a pair of sticks, and a couple buckets, and just bang. He loved to listen to his rap music, you couldn't tell him nothing about Cash Money, or anything pertaining to BG. Most of all he liked to DANCE "cut up." Dj enjoyed spending time with his family especially his parents. He often came to watch a game with them, or eat a nice dinner with them. Dj wouldn't miss a beat with the people he loved. He always knew how to reach his Big sister. He would never go weeks without calling her. Even if it was to just let her know that he was ok. All of these great memories will forever be in our hearts. Dj was proceeded in death by his beloved grandparents Luther and Lola Ann Perry. He leaves to cherish his memory, his loving Mother; Angela Mann, Father; Dennis Mann Sr., Sister; Denisha, Brother in law; Joseph, Cleveland, and Nicholas. Two sister in laws; Sarah, and Tay one surviving Uncle; Andre. Aunts; Denise, Delisa, Loretta, Helen, Pearl, and Lena. Two nieces; Tyneisha, and Cierra. Two nephews Joseph Jr. and Kingston. Godmother Shantee Malloy and her children. In addition to a host of cousins relatives, and friends

Dennis Mann Jr. the son of Angela and Dennis Mann Sr was born on June 28, 1988 in Baltimore, Maryland. Dennis departed this earthly life, for his heavenly home on August 232020.Dennis was affectionately acknowledged by his nickname "Dj." He... View Obituary & Service Information

The family of Mr. Dennis Mann, Jr. created this Life Tributes page to make it easy to share your memories.

Dennis Mann Jr. the son of Angela and Dennis Mann
Sr was born...