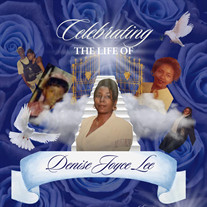 DENISE JOYCE LEE, beloved daughter of the late Louise Moore,and the late Roosevelt Lee, was born January 2, 1962 in Baltimore,Maryland. On March 30,2022,the LORD saw fit to call His newest angel home to rest. Denise received her education in the Baltimore City Public School System, graduating from Patterson High School, where she was a Varsity cheerleader. Denise was the youngest of four children, and she grew up and lived in various neighborhoods throughout Baltimore. Always a hard worker, Denise worked for various companies, including the Hyatt Regency Hotel, and Allied Universal Security. “Neice”, as she was affectionately called by Johnny and her family, or “Ethel” as she was called by her cousin Julia, was a loving partner, daughter, sister, aunt, niece, cousin and friend who would greet you with her beautiful smile that truly touched your soul. She touched the soul of everyone she came in contact with, and if she called you a friend,then you truly were her friend. If you called her on the phone, you could count on her, “What’s going on?” greeting when she answered. Denise enjoyed spending time with her partner and love of her life for over 30 years, Johnny. She also loved traveling, shopping, and getting her hair and nails done. Denise lived her life to the fullest even when she became ill. She lived every second of life until the very end. In addition to her parents, Denise was preceded in death by her brother, Bruce Lee,Sr.; her sister, Shirley Law; aunts Gwendolyn Dorsey; Joan Finney,and Juanita Ramey; uncles Jack Law, Merritt Law Sr and Ernest Law, and several of her cousins. Denise leaves to cherish her memory, her devoted partner of over 30 years, Johnny Dewitt; brother Henry Law; one aunt, Beulah Scales, and a host of cousins, nieces, a nephew and other relatives and friends.

The family of Ms. Denise Joyce Lee, created this Life Tributes page to make it easy to share your memories.